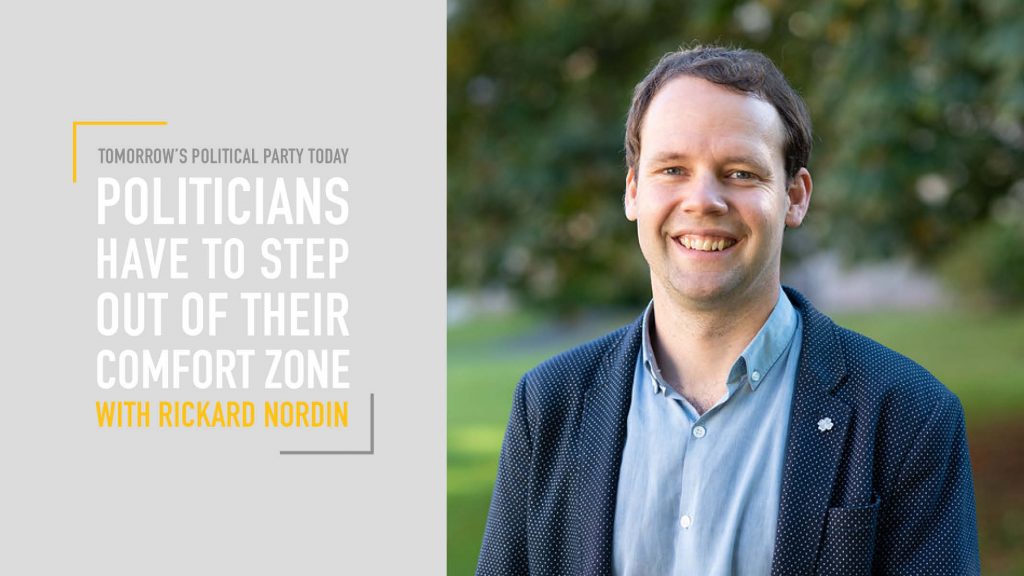 Rickard Nordin is a Member of the Swedish Parliament and started to discuss politics live while playing esports. He regularly reaches out to a crowd of thousands, allowing citizens to directly approach a parliamentarian.

Your bio on Twitch states that you are a member of parliament with a special interest in esports, and that your channel aims to highlight esports and politics, creating a path into parliament for all interested gamers. Could you tell us more about what you do?

Twitch is a platform a bit like YouTube, but we play video games in one way or another. I play regularly, every week or so. There are people who watch me play, but we also have a political discussion at the same time, live on the platform. So, anybody can come to ask their question and join the discussion. We speak about everything – from esports to drugs, electricity, energy or the climate. It’s a bit like an open platform where anybody can come and discuss things while playing games.

How did the idea to stream and talk politics at the same time come about?

It was actually quite simple. A lot of politicians say: “Let’s get people to come to me, and I will tell them everything about politics and what I do and why it’s so great.” The thing is, why should they come to me when I can go to them? I’m interested in esports, I watch a lot of Twitch myself, and I realised that it’s the perfect platform for me to reach an audience with an interest in esports. I realised that we can help each other: I can start a movement about esports in parliament, and they get a channel straight into politics.

Would you say that the gaming element lowers the threshold to discuss politics with a member of parliament?

Yes, being on Twitch really lowers the threshold for contact. I show up where people already are instead of them having to come to me. It’s quite simple during elections, when politicians are out in the public eye, campaigning. Well, this is me being in the public eye all the time, even in between elections.

Do you know the demographics of your audience? Is it mostly young people?

Actually, it’s quite a mix. There is a prejudice that only young people play games, but it’s all kinds of people. There are people who are 15 years old, but I also know some who are 45 who just come on to this show enjoy it because they like the combination. The discussion is always good, and we have a lot of fun doing it.

For a lot of people, gaming is a way to escape real life. Did you get any negative feedback for bringing politics and real life into that space?

I would say that 99% of people who come on to my show and my Twitch account are positive. And the ones who aren’t don’t even need to be banned, they simply don’t get any attention. There are far more people who do like it, and they tell the others: If you don’t like it, you can go somewhere else. I even got help from the Twitch Partner community, who told me: this is perfect, we want more of you guys here. The community itself takes care of the issue, and they have actually convinced a few people who were sceptical that this is a good place to be.

How did your colleagues in the parliament react to your streaming sessions?

I’ve actually tried to have some of them on my show as well, so they can learn and discuss their own special topics. For example, education is an issue most people can relate to, so I had the person who works on education in my party on the show. It’s a way for my audience to get to know them, but also a way for them to learn about esports and the audience. I think this is a way to get more people to learn about how politics works. I am from the centre party, we are green liberals in the middle of the field. But my audience consists of people from the far left to the far right, as well as people who have never voted before. It’s good to have this open connection. The threshold is much lower than for writing an e-mail or going on Twitter and starting a discussion. It’s so much easier to just click and join the discussion.

You have been doing this for quite some time now – what have you learned so far?

The biggest lesson I’ve learned is that anyone who claims that the internet and the gaming community are full of hatred and harsh words is wrong. I always use this example: Sure, we get a few people like that, but they get tuned out. And the ones who stay are the ones who are positive and like the discussion. They don’t always agree with me, but that’s the point – I learn a lot from them, and they learn a lot from me. I think that experience is the most important thing that I have learned.

In general, I think more politicians have to step outside their comfort zone where they speak into a camera, speaking at people. They have to let people speak to them as well – and do it live in a way that is beyond their control. I can’t control the discussion, but that’s the beauty of it. You never know what’s going to happen. When I start a session, I don’t know what’s going to happen an hour later. It’s always different, and that’s what I like about it. Because that’s the way you have a discussion with your friends – you don’t know what you’ll be discussing an hour from now. More politicians should be open to that.

In other words: don’t go in with an agenda?

You should go in with the agenda of keeping an open mind and wanting to learn, because that’s the best way to get people to listen to you as well.