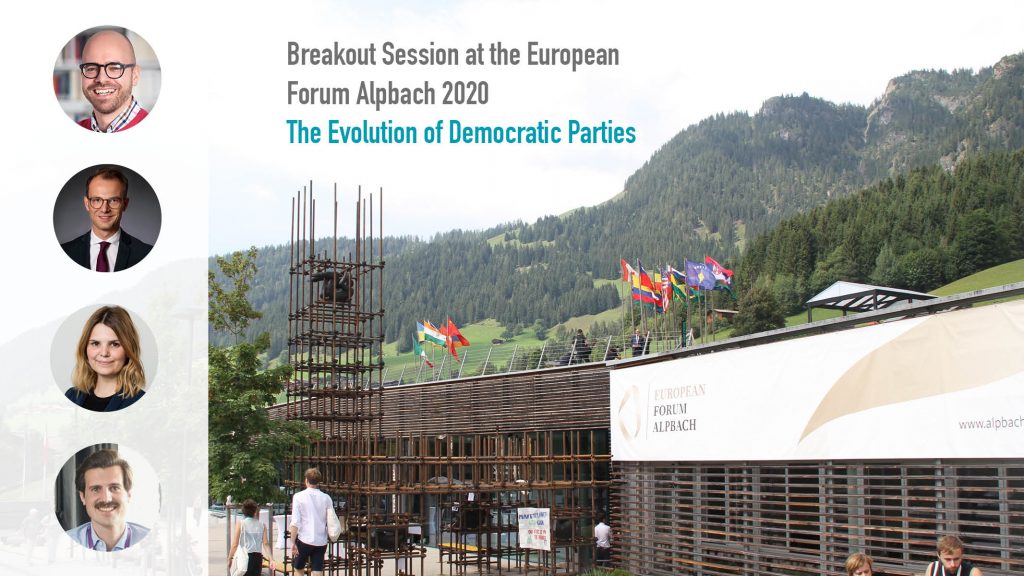 On 31 August 2020 the Innovation in Politics Institute hosted a Breakout Session on the “Evolution of Democratic Parties” at this year’s European Forum Alpbach, in cooperation with the Political Academy of the Austrian People’s Party and the Club Alpbach Germany.

Together with distinguished practitioners from three different German parties, Tanja Hille (Disrupt SPD), Paul Loeper (VOLT), and Stefan Gruhner (CDU), Josef Lentsch from the Innovation in Politics Institute Germany discussed methods for the survival of established political parties and what they can learn from smaller political grassroots movements.

The discussion reflected upon two main fields of innovation in political parties: structure and culture. Regarding the former, the conversation focused on how providing space for engagement at the base of the party can help to approach structural changes within the party. With regard to political party culture, the panelists highlighted the need for an innovation-friendly and open-minded organisational culture ready to address the challenges of the 21st century with the help of new ideas from inside and outside the party.

Bottom-up: give every party member the opportunity to help re-creating party structures

After the panel, an audience member commented: “You know what is interesting? Every speaker of the panel was stressing the importance of getting in touch with the base and to include party members when it comes to innovating a party.” The message of the breakout session was clear: fundamental change driven by participatory processes is only possible if aspired to by the party manager. First of all, parties should provide space for an exchange of ideas on how to reform the party from within. Simultaneously, the leadership level should be more open-minded towards new bottom-up approaches.

DisruptSPD is a good example proving that fundamental change of traditional political parties should consider all party members rather than only board members. The initiative was established after a party festival for all members of the German SPD in April 2018. An impact team of 6 members gathers and refines new proposed ideas and communicates new concepts with party managers. “Disruption” in this sense does mean to demolish the party, but to foster the renewal of the “old” SPD and to further the compatibility of political parties and society.

The political newcomer VOLT, on the other hand, did not have to implement a bottom-up approach as it has included members on the grassroots party level since the very beginning of the party’s existence. “Everyone is a leader in itself,” says Paul Loeper, board member of VOLT in Germany. Therefore, members are provided with training to develop skills and channel their interests. This approach results in a natural formation of teams that specifically work on advancing innovation. Since VOLT is a European movement, party working groups also interact across borders which underlines the concept of this unique European party.

Top-down: About gender equality and the new party culture

Collecting innovative ideas and conceptualising a structural change of the party are in vain if party leaders are not receptive to innovation. Bottom-up participatory processes need to find an echo at the management level.

The German CDU and its counterpart in Austria, the ÖVP, have understood the party members’ expectations to finally get with the times and start representing societal diversity among members as well as party leaders. Ministerial ranks in the Austrian government are therefore equally divided among women and men. Experts in their respective subjects, who have no former political career, are increasingly holding leading positions in the Austrian government’s departments. Stefan Gruhner further described that the German CDU plans to adopt a female quota within the coming years among the party’s board members as well as among delegates at the federal and national level. Gender equality and including members of the LGBTQI+ community can help with connecting traditional parties to our societies and open doors to progress and new ideas.

Tanja Hille from DisruptSPD further argued that structural change is accompanied by a long-term process of rethinking party culture. Fast growing and powerful parties should not refrain from putting efforts into staying open-minded towards promising movements within one’s own as well as in other parties.

“It is not just about innovating a party, but to stabilise democracy”

At the end of the Breakout Session the speakers agreed that political innovation in parties is not only an operational or organisational issue, it also makes society regain trust in politics and therefore stabilises democracy. Populist and anti-democratic parties worldwide are growing in size and influence. Thus, democratic parties have recognised the urgency of adapting new methods and ways to not get lost in political evolution. Bettina Rausch, who herself played a leading role in the development process of the ÖVP, added that the evolution of parties is very much about leadership. This is true, but in addition to top-down initiatives bottom-up movements within parties have to play an equal part in innovating politics. The evolution of democratic parties is strongly connected to the evolution of democracy. The growing tendency towards participatory democracy in our societies as a whole should likewise be practiced within political parties. We can already observe some ongoing evolutionary processes in parties that have a participatory and deliberative character and should build upon these achievements. As Bettina Rausch, ÖVP, concluded: “Innovation is complicated, but possible.”