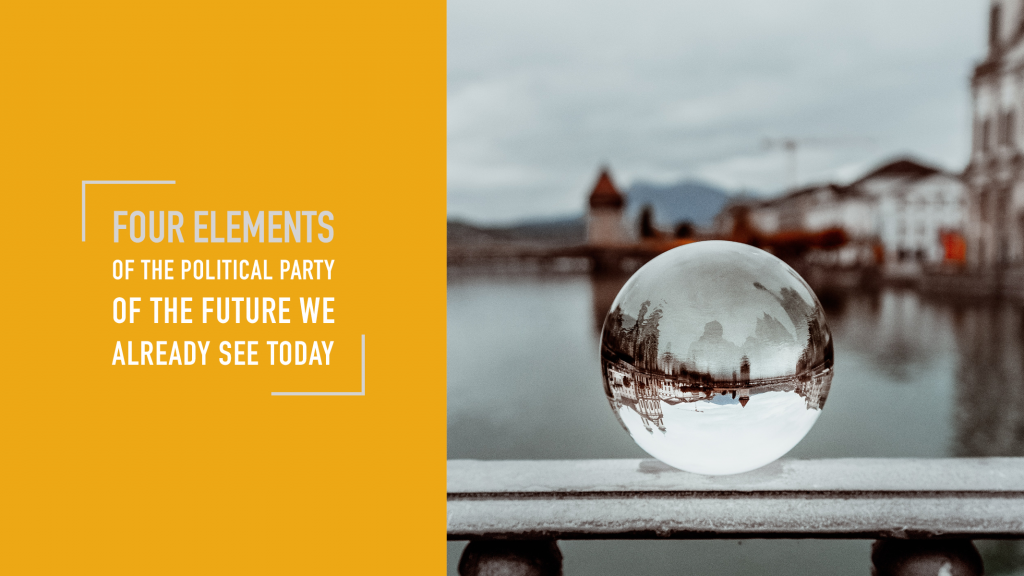 This is the third and last part of a blog series on the political organisation of the future.

In the last blog we outlined a framework on the political organisation of the future. We argued that the political organisation of the future will be a value-driven, ambidextrous institution that is open, transparent and data-driven. Its workforce will be agile, diverse and tech-literate and will collaboratively develop user-centred digital solutions whilst keeping up an activating, targeted dialogue with its stakeholders.

In this blog we will shed light on one specific player in the political sphere: political parties.

In doing that, we will show that elements of the political party of the future are already visible today – but so far they are spread over several entities.

Driven by purpose, guided by values, and led by many

To succeed in the ever-changing environment called “politics”, political parties need a stable foundation and the innovativeness to successfully react to emerging challenges.

In 2012, the liberal citizens’ movement NEOS was founded for the purpose to act on the political gridlock in Austrian politics. This authentic desire for change drove the founders and attracted thousands of fellow campaigners. The diversity of supporters and the social complexity of political movements made the founders decide to establish a value-based organisation. By defining unifying core values, the founders built a system that guided organisational design, behaviors, and policies. These values also influenced the way the organisation was managed: instead of hierarchical structures, leaders empowered staffer and activists to act idealistically but also professionally and self-responsible at the same time. This focus towards self-leadership brings along a rare new self-conception of political leaders: empowering others by making them (co-)leaders of the organisation.What is exceptional in NEOS’ performance is that – compared to other centrist political start-ups like Nowoczesna and Ciudadanos – they managed to grow steadily after entering Parliament in 2013 . As of today, they are part of two provincial governments in Austria and currently poll around 10% on the national level.

In 2019, the German Christian Democratic Union (CDU) named Stefan Gruhner as their strategic coordinator. In that role he deals with the future of the German People’s Party and is responsible for driving party reform. For example, he explores the possibility of introducing a female quota in the CDU – a very unusual idea for a conservative party. As he is closely connected to the party leadership and its General Secretary, this reflects what we have already argued in another blog: if you decide to strategically manage innovation one way is to make it a permanent position that has real organisational power. At the same time, CDU is also harvesting existing ideas from other sources of great ideas. To do that, the party launches e.g. idea contests to identify innovative ideas for member recruitment, donations, or campaign materials. By using these different approaches, the CDU is on the one hand able to explore new (and maybe unusual) opportunities, and on the other hand exploiting existing ideas and approaches.

Open and transparent by default

As of today, new modes of engagement come in two forms: either as open primaries to elect party leadership as the French Socialist Party or to choose election candidates as the Austrian Liberals (NEOS). Or in new forms of participation, such as French En Marche digital membership model that allows citizens to discuss, contribute and learn on several online platforms. Another consequence of citizens’ demand for openness is that political parties will become fully transparent. For example, already today, the Hungarian party Momentum not only openly publishes its own financial statements but also the declaration of assets of its representatives and mayors.

For quite some time, using ideas or resources from both inside and outside the organisation to accelerate internal developments is an established practice in the business world. This approach, which is called Open Innovation, has found its way into political parties as well. For example, Spanish Podemos gave citizens the opportunity to provide the party with microcredits to cover the costs and expenditures of political campaigns. Involving the broader public may also happen regarding policy development. For example, the Austrian People’s Party crowdsourced its new manifesto and the French party En Marche invites citizens to submit their ideas for new policies and discuss them with others through an online-platform.

The future is already here

The political party of the future has not yet been fully realised. But elements of it are already visible today: in Austrian, French, German, Hungarian, Spanish (and many other) centrist political parties innovative approaches emerge, thrive and get established. This is important not only for them, but for liberal democracy as a whole.

By providing you insights into these four elements, we gave you a glimpse into what the future of political parties will bring about. But there are other elements we need to look into: How to design parties on an organisationally to be adaptive to change? How will the use of daa affect its culture, behaviors and policies? What skills are needed to master future challenges?

To fully understand the political party of the future it is not enough to look into best practices which already exist today. We need to broaden our view and look into other industries and deduct insights and hypotheses.

If you are a leader in politics you may not consider this as your job, but we argue you should.

This blog series served to inspire leaders in the political sphere to envision the political organization of the future. What do you think about this blog?

Looking forward to hearing your thoughts!

The political organisation of the future