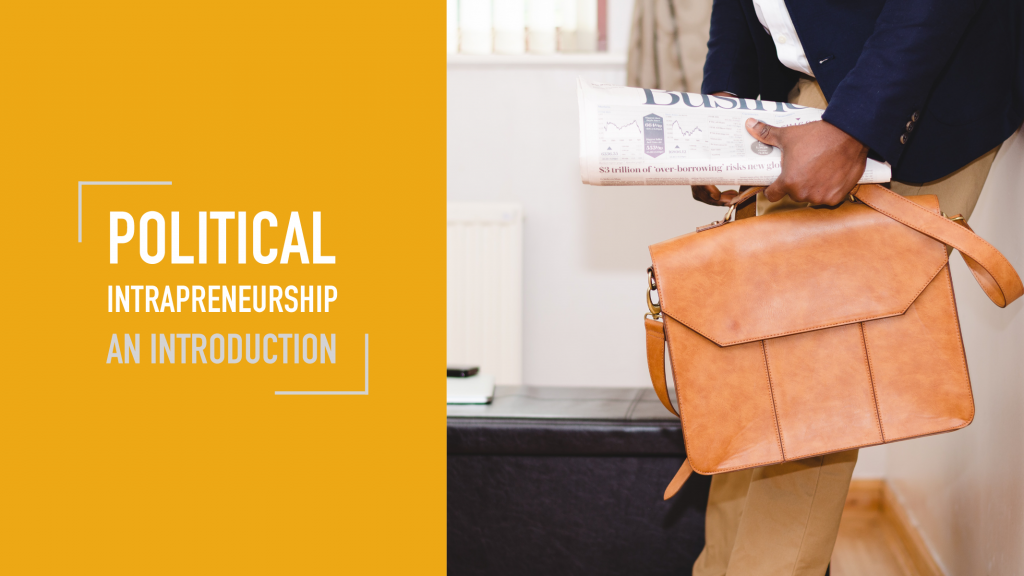 In 2019, I published a book on how to found new centrist political parties and enter parliaments with them. I called it “Political Entrepreneurship”, as there are many parallels between startup entrepreneurs and, what I called, the founders of “political startups”.

To me, entrepreneurship is about thinking big, starting small, and acting fast – or in the undying words of Howard Stevenson, “entrepreneurship is the pursuit of opportunity beyond resources controlled.” This is exactly what I saw when I observed and interviewed more than 40 party founders from 6 countries.

As I observed the developments over the last years, however, I have come to the following conclusion: To save our democracies and advance them further, we need transformative political startups – but we also need transformed traditional parties. I have therefore started to work on a second book, which will be called “Political Intrapreneurship”. It will focus on how to innovate and even disrupt traditional parties from within. It will focus on the people who entrepreneur on the inside, in the pursuit to create something new from the old – the people I call “Political Intrapreneurs”.

There are many, many stories of how big, transformative “party reforms”, as they are called, have failed. There are few stories on how they succeeded. We know what does not work – but what works? The existing books and studies on this question are usually monographies – meaning they focus on the story of one particular political party. That each party is unique in its own way, however, does not mean they do not share some commonalities. The meat of the matter for the practitioner, therefore, lies in a comparative approach – looking at different cases, understanding common patterns behind all the peculiarities, and drawing out shared success factors.

I will use this blog series to formulate some thoughts that I will further elaborate on in the book, and present some early insights derived from research and the first series of interviews. Also, I want to use it to develop my own thinking further. Therefore, your questions, your feedback on these thoughts, and your critique on where they may be heading into the wrong direction, is highly welcome.

A disclaimer: I will look at case studies from centre-left to centre-right, like the British Labour Party, the Swedish Moderaterna, the German Greens, the German FDP, or the Austrian ÖVP (in the book, I will look at a few more). In my analyses, I will take a highly pragmatic stance. Analysing these cases, however, does not mean I necessarily approve of them – in other words: to understand all is not to agree with all.

In the first blog, I will focus on how to get the transformation of an established political party started.

Political Intrapreneurship: Stage 1 – Understanding the party as a system