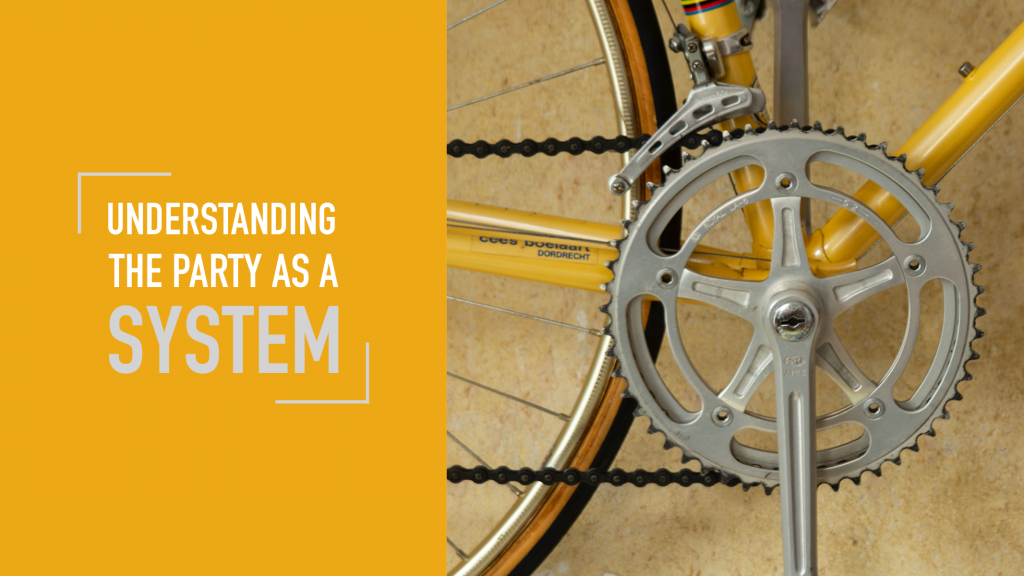 Read the introduction to the blog series here.

In my book “Political Entrepreneurship”, which analyses how successful political entrepreneurs build and scale new political parties, I lay out a roadmap on how they proceed. The first stage of this roadmap is called “Understanding Political Systems”. If Political Entrepreneurs do not fully understand critical aspects of the political system they want to disrupt, they will fail. And by understanding I mean a deep intellectual and emotional appreciation; an intimacy that is comparable to love – even though sometimes mixed with hate for some aspects of it.

For Political Intrapreneurs, the system they want to disrupt is the party. Therefore, in the first step, they need to understand the party as a system. They need to learn the formal and informal rules of a complex living organism, how power is structured and organised via its constitution and its bylaws, its subcutaneous flows of information, its decision making processes in its gremiums. They need to master the hard math of quorums and vote targets, as well as the soft aspects of culture, networks and insider relationships in all party spheres of influence. If you want to dive deeper and learn about the various spheres, my colleague Nicolas Stühlinger and I have developed a spherical model of party innovation.

With a deepening understanding of the party as a system comes the identification of challenges and opportunities on three different levels–strategy, policy and organisation; the latter can be further broken down into aspects of leadership, structure, culture, and execution. Whereas some of the challenges and opportunities might be obvious even to the public, sometimes for years, some deeper flaws and virtues will be hidden from it.

Parties are complex beasts–to develop a deep understanding of them may take years. Learning means first and foremost trial and error, again and again. For this, you need to be inside of the system. However, to take on board new ideas with disruptive potential, you also need direct access to the world outside the party. Therefore, Political Intrapreneurs are usually neither pure insiders, nor complete outsiders; they are insider-outsiders. They already have spent some time in the party in proximity to power – but they are more often than not found outside the innermost circle of the party leadership, or even in the semi-periphery of party power. There, the new can emerge and start to take form with fewer constraints.

Political Intrapreneurs may have already spent some time as senior staff, in a mandate or in a strategic function (Christian Lindner had stepped down as General Secretary of the German FDP in 2011 before becoming Chairman in 2013), the may have headed some wing or party organisation (Sebastian Kurz of the Austrian ÖVP headed its youth organisation before ascending to power, as did Fredrik Reinfeldt of the Swedish Moderates); they may be seen as talents, sometimes even potential leaders-in-waiting (as Labour’s Tony Blair in 1994); they have studied the decision-makers, and have learned from their triumphs and failures.

Their insider-outsider position provides Political Intrapreneurs with the drive to disrupt, where insiders may carry on, and with fresh perspectives, where insiders may have blind spots. At the same time, being in two worlds at once may give rise to a high level of ambivalence. Therefore, Political Intrapreneurs at this early stage often start sorting out their thinking by reading and writing down their thoughts–publishing articles, blogs or books. This also helps them start building up gravitas, gain a public profile, and start attracting allies for the battles ahead. Most importantly, they start formulating a substantiated vision of an agenda for the future political party, and a critique of the status quo (as did Fredrik Reinfeldt of the Swedish Moderates in 1993 with “The Sleeping People” while he was heading the youth wing, almost 10 years before he became Party Chairman).

Envisioning the future political party will be the topic of the next blog.