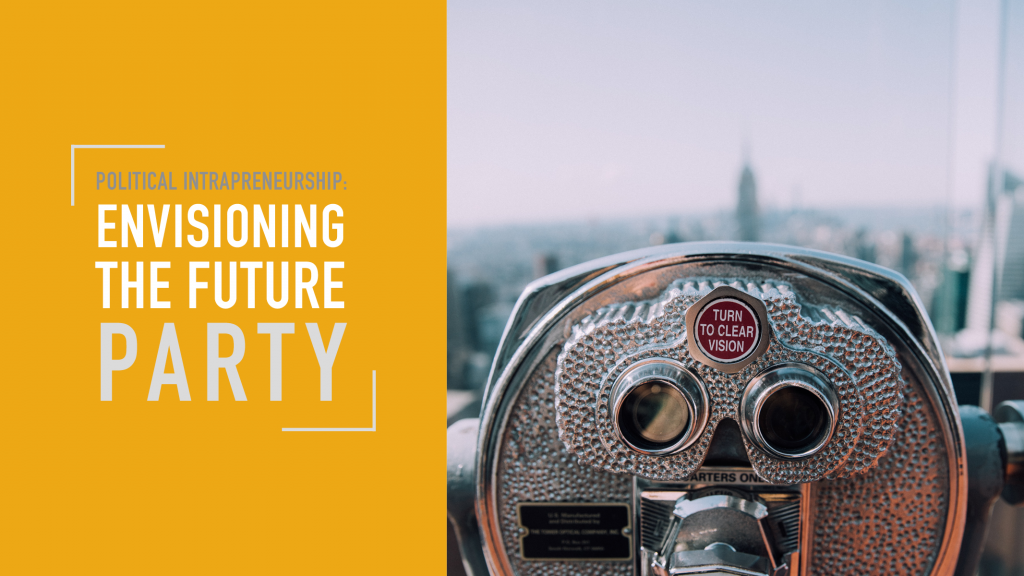 In the last blog on how to disrupt established political parties, I wrote about the importance of understanding the party as a system in the first step. An honest, unsparing and deep analysis of the party is fundamental to all subsequent steps: what are its strengths and weaknesses, what threats and opportunities does it face? This needs to be based on as much solid research and data one can access and afford, complemented by firsthand experience.

Based on lots of questioning, observing, listening and reading, political intrapreneurs use the insights gained in this analysis as a starting point for laying out a critique of the status quo. This in turn becomes the basis for developing their vision of the future party, and its role in the future country.

Processing all the relevant information to crystallise the vision takes time, and is much more of a back and forth than a continuous phase. Many political intrapreneurs move between input and output in an almost dialectic way – to develop their own thinking, they spar with trusted advisers, and write in various formats: tweets, blogs, op-eds, and often also books.

Such an approach works for political intrapreneurs as much as political entrepreneurs, the founders of new parties. Matthias Strolz, former Chairman of the young Austrian party NEOS, formulated it this way: “I write books to sort myself out intellectually. Putting my thoughts between two book covers, and structuring them in this way, leads to order. Order is important to me to be at full strength.” Strolz wrote one of his books, “Why we do not trust politicians, and what it would take them to change this”, years before founding NEOS; with hindsight, it can be read like an instruction manual for the political startup.

Fredrik Reinfeldt of the Swedish Moderaterna party likewise wrote several books before becoming party leader in 2003 and later on Swedish Prime Minister in 2006. He also published Op-Eds in national newspapers. He used those shorter pieces for testing the waters with new thinking, strengthening the party profile by provoking reactions, and signaling a paradigm change in the party’s orientation as Sweden’s “new labour party”.

Similarly, Tony Blair, who became Chairman of the Labour Party in 1994 and British Prime Minister in 1997, laid out his vision of the future party in the 1995 lecture titled “Let us face the Future”.

Even though ghostwriting has always been prevalent in politics, today, even more politicians do not write themselves – which, as some would say, is part of the problem: others do the thinking for the party leaders. Without deep insight, however, no clear vision.

Lack of vision, or lack of action?

In some cases a political party might not suffer from a lack of analysis, or even a lack of vision, but a lack of implementation. What needs to change might be well known, perhaps even in the public domain – but for internal reasons it is being blocked and not put into action. The Austrian ÖVP was such a case: for decades, people had known the reasons for its ailments; still the party was not able to disrupt itself.

In both cases, whether there is a lack of vision or a lack of action, the political intrapreneur cannot simply soldier on by him- or herself. The third step, therefore, is to prepare oneself for a wild ride and assemble a small group of a̵v̵e̵n̵g̵e̵r̵s̵ fellow intrapreneurs. Within this small group, people need to deeply trust each other, create a joint understanding of the fields of actions, and what measures need to be taken. Also, these intrapreneurs need to bring specific skills to the turnaround projects. This will be the topic of the next blog.

Political Intrapreneurship: Stage 1 – Understanding the party as a system