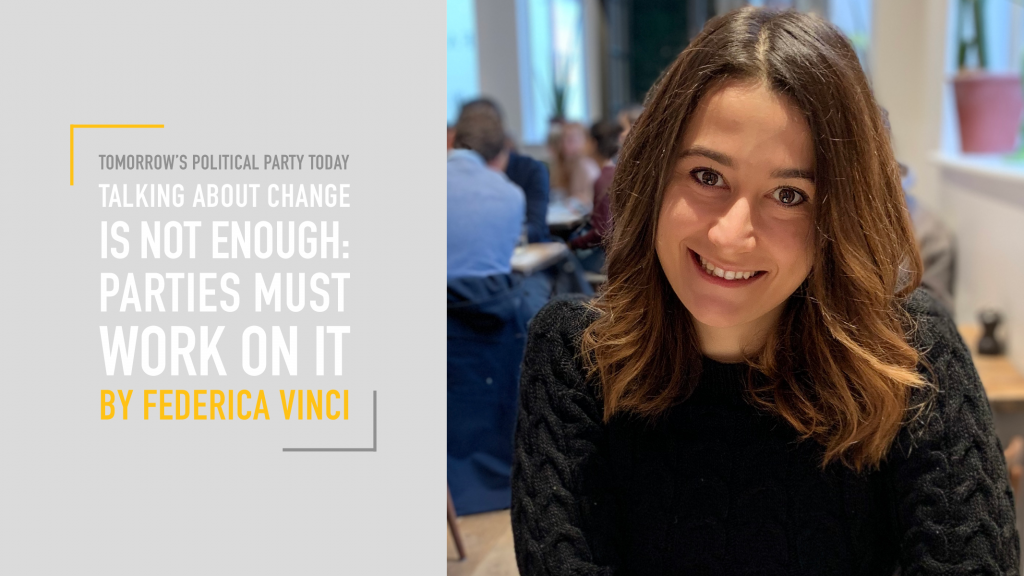 Brexit changed my life. That night made me realise that I was living a European dream that not only was not shared by the majority of the people, but that these same people had been impacted by the narrative of populist political parties that pictured it as a nightmare to escape from.

To me, politics was the root cause beyond that night: coming from Italy, the country of Berlusconi and Bunga Bunga, I had always connected politics and political parties to sexual and financial scandals, seeing them as enclave of power born to get a share of seats in the parliament while professing to bring about change. I had never seen what political parties did to understand people’s problems, to support them in their everyday struggles, to live by the values they so openly professed before the elections.

Yet, if politics was the problem, it was also the only possible solution. While people are getting farther away from politics, elected politicians still are the ones that draft these legislations that govern our lives. Politics was beyond any big decision that would have affected our present and especially our future: some of our elected political leaders were the ones that opted in and then out of the Paris Climate Agreement or the Iranian Nuclear Deal; they were the ones that campaigned on Frexit, or on the death of migrants in the Mediterrenean; they were those who were ready to boycott the Euro for a handful of votes. Despite the fact that political leaders made all of these decisions, there was no transnational dialogue among them; no vision of the future; no abilities to work for the common good rather than for electoral interests.

This needed to change: politics needed leaders moved by the genuine interest of their people, a transnational approach to problems and solutions, and the willingness to include people in their policy making rather than scare them with sensational posts on social media. For this reason, we decided to create Volt and to change the way in which politics is done and create a party that represents what politics should be in our lives and in our future.

Parties should bring about change, not only talk about it. For this reason, they should be physically” present at many different political levels and settings – from the very small neighborhoods of Rome, to the town of Isernia, to the center of Milan, to the national and european level.

At every level, we should work with citizens and organize them to bring about political and social change. How? Creating a party from scratch gave us the great opportunity to imagine it as we thought politics should be conducted, including three main aspects that we thought were essential for the party of the future: listening abilities and connection to the ground; diffused leadership and activism; competences and scientific/evidence-based policy-making.

First of all, our political party tries to reconnect citizens to politics, representing that arena where people feel listened to and where citizens can understand what role they can play into the political life of their town, region, country and continent. To do so, we started to go on the ground to understand what citizens need, what vision of society they have and organize them to bring about change not only through their democratic elected representatives, but through activities and campaigns that can have an impact on their everyday life. Through these activities, we realized that one of the biggest needs of our people is to be listened to, to be able to voice their problems without being judged and without imposing blue print solutions that do not include them in any step of the process.

An example of our method is the work done in the small conservative town of Isernia. With a group of initially seven activists, we started to ask questions and listen to citizens, NGOs, shop owners, and businessmen. We clustered their problems and asked them to help us craft solutions that would have worked for them. This translated into a co-crafted political program that we are running on for our municipal elections.

Listening is the first step, but does it suffice? When we worked on Volt, we realized that one of our major problems with traditional political parties was that they popped up six weeks before the elections, and then disappeared again right after them. We decided that, if we wanted to be talking about change, we needed to work on it, constantly. For this reason, we built an activism-based political party: based on the method of community organising, we try to understand the needs of our constituency and work with them to address their problems from the local to the European level, regardless of the elections.

At the European level, we built initiatives such as EuropeCares to collect, sort and deliver essential goods to migrants’ camps during Covid; nationally, we are working on dozens of campaigns from legalizing euthanisia to facilitating access to abortion rights; while in every town, we work with citizens to make their cities better places to live in: we clean up parks, we paint buildings, facilitate intergenerational connections, create intercultural exchanges through our networks. The idea behind everything we do is “walk the talk”, at any stage of our actions.

Beyond actions and words, political parties need to look out for data. Traditional political parties and leaders have, for too long now, have campaigned on non-scientific and populist claims to scare the electorate and drive their consensus based on false accusations and exaggerated allegations – i.e. the case for the pro-Brexit campaigned that asserted that the UK would have been invaded by Turkish migrant if they stayed in the EU.

This needs to stop, even more during Covid, when people are understanding the importance of science. This is why our entire policy process is driven by experts in different fields and backed upon datas and science in every step and for every proposal.

When people are tired of politics but when their participation is crucial for our future, it’s time for political parties to take up responsibility and become part of the solution, rather than be considered the problem. To do this, parties need to start listening actively to their people, engage them in concrete change, bring about evidence-based solutions  and show that their real objective, the only and most important thing, is to bring about change, rather than only winning seats.

This is the party of the future, this is what we work for.

Federica Vinci graduated in International Public Management at Sciences Po and Community Organizing at Harvard. In 2020 she was selected by the Obama Foundation to participate in the Obama Leader: Europe program. She joined Volt Europe in March 2017 and in 2018 she founded and since then led the Italian section of Volt. Currently, she mainly represents Volt Italia in the public arena and works on the development of its strategy and electoral participation. She is also the founder of the local group of Volt Isernia, where she is bringing this new way of doing politics in her conservative town. Federica Vinci is passionate about politics, community organising and leadership development, which she taught at the Harvard Kennedy School of Government in the program “Leadership, Organizing, Action: Leading Change”.

The digitalisation of community organising