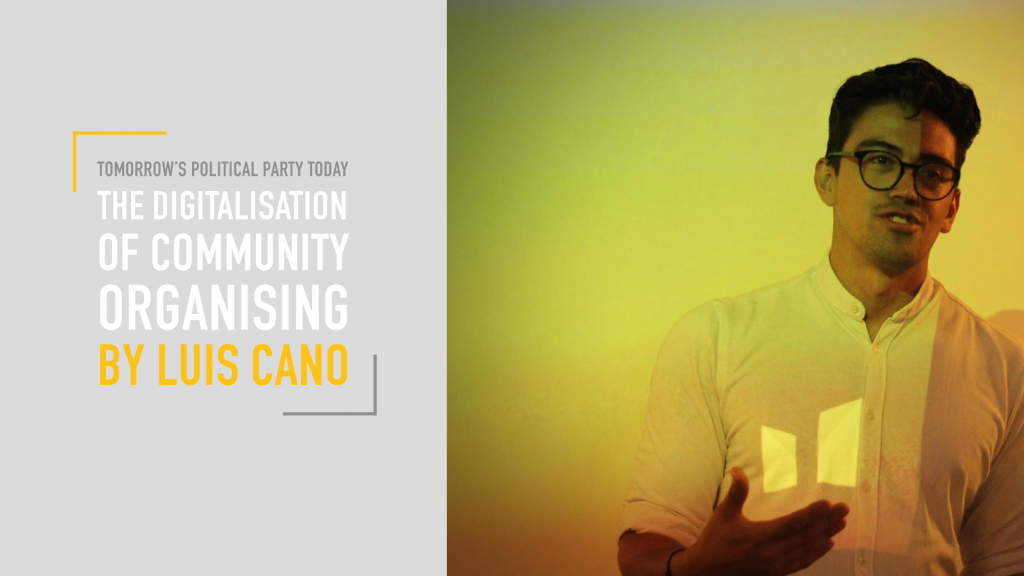 During the last fifteen years, we have seen the emergence of new political movements globally with a community organising approach towards political engagement. Before that, we saw political parties trying to use mobilisation as their main strategy to get to their supporters and members. Political community organising is the prioritisation to create and empower local organisations of politically minded communities for them to identify their own local problems and to reach common agreement on how to solve them. On the other hand, mobilisation implies central problem identification and guidance to local organisations on how to identify and how to solve problems.

New movements started mimicking the grassroots approach of past civil movements to create armies of activists and supporters. This approach is the result of movements rising without strong financial or political power which forced new political actors to build up power from the bottom up. Surprisingly, the approach has worked and also permeated political mainstream dynamics. The Obama campaign in 2008 paved the way for political community organising to be the future of political engagement.

This call for political community organising strategies is pushing well-established parties to reconsider their one-way communication and mobilisation strategies and to instead start campaigning on the ground with teams of local heroes. As a result, we see more and more political stands on the street and we are more prompt to get a knock on our door as an exercise of canvassing. Yet, in fifteen years and with the digitalisation of political debate, community organising has become a parallel exercise next to centralised social media campaigning. Parties and movements continue to create local teams to manage small constituencies and at the same time, they start national social media narratives which can contradict the local needs of the many constituencies of supporters.

This is understandable. The party of today wants strong local organisations led by local organisers sharing the party values, but also wants to keep control of messaging and value deviation. This can potentially result in local frustration, as local leaders might feel that hours of local discussion are wasted when guidance comes from headquarters on how to address local problems. Yet, in practical terms, no political party can be approaching engagement fully from a community engagement perspective, nor from a mobilisation perspective.

The party of the future should use digital tools to foster the creation of strong local communities as well as the alignment of messaging and values across their decentralized structures. A few ideas on how to achieve that include:

The COVID-19 crisis has also accelerated the digitalisation of community organising. Parties that have not yet started the process of digitalisation might come back to the local communities and meet with local apathy and lack of engagement. With each wave of this pandemic, it becomes clearer that mobilisation alone is not a good tool of engagement. It becomes clearer also that social media communication needs to be controlled but it  should accommodate local needs in the central narrative based on the local input from the new local digital communities. There is a reason for parties to consider community organising seriously and start implementing it digitally. It is not too late to start implementing the change and adapting to digitalisation, the political party of tomorrow can start engaging its communities digitally today!

About the series “Tomorrow’s Political Party Today”
International thought leaders present their visionary ideas of how the future political organisation should look like. They emphasise one specific aspect and share best practices highlighting how this specific transformation can be done.

Become a Polis contributor
Are you keen on presenting your visionary ideas of how the future political organisation should look like? You can contribute a blog article to our “Tomorrow’s Political Party Today” series. Send us your prompt to md@innovationinpolitics.eu.

Talking about change is not enough: parties must work on it