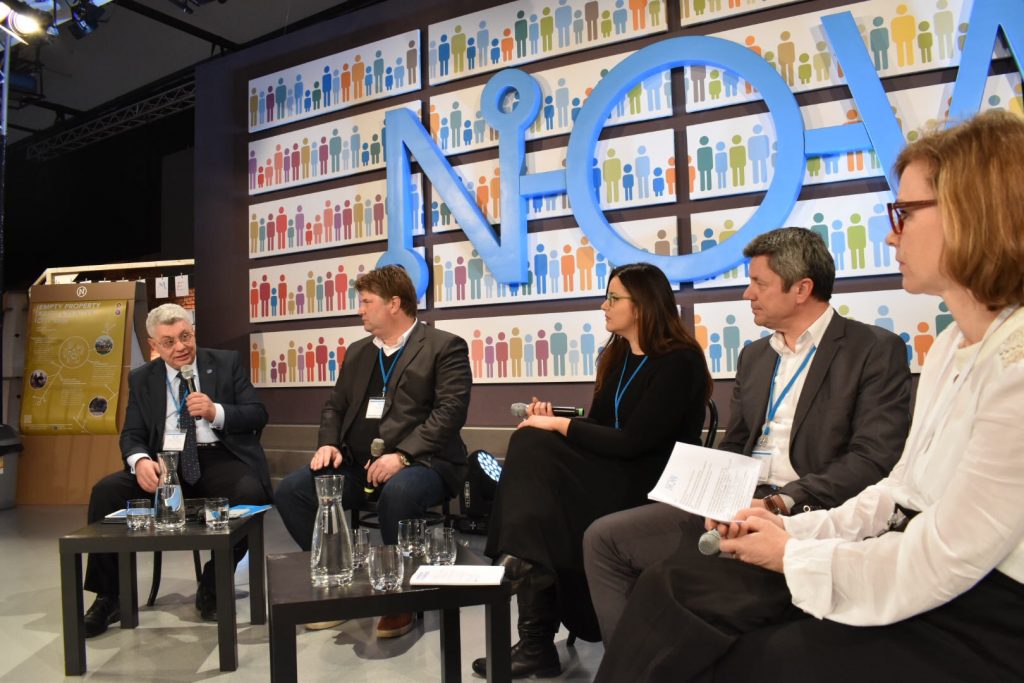 Local politicians, experts and young people are working together for social cohesion

Vienna  – Social tensions and menacing divisions are increasingly creating problems for cities and communities. Mayors all around the world are coming under pressure. Over 220 participants from 30 countries are meeting at the 7th International Mayors’ Conference NOW on 17 and 18 February. Mayors, young people and experts discuss ideas and initiatives to strengthen social cohesion at a local level. The focal theme for the conference is “Space for interaction – overcoming division”. The conference has been organised by Act.Now in collaboration with the City of Vienna, represented by Mag. Jürgen Czernohorszky (Executive City Councillor for Education, Integration, Youth and Personnel).

In challenging times, interaction between people from different social, cultural and religious backgrounds is more important than ever. The NOW Conference offers space for local politicians, young people and experts from Europe, the Middle East and Turkey to meet and exchange ideas. The participants work together to find solutions, for instance how to strengthen cohesion at a local level. The programme also features 20 inspiring promising projects and dedicated short talks on community projects, as well as 24 workshops to motivate participants to put the ideas into practice.

The two-day conference took place under the auspices of the Austrian Federal President Dr. Alexander Van der Bellen and was opened by Mag.a Doris Schmidauer and Act.Now co-founder André Heller. “We are convinced that the young generation is the key to shaping the future. I am personally deeply moved to see so many young participants here,” said the multimedia artist at the start: “It’s up to us to change what doesn’t feel right for us or our planet.”

For mayors in many places, being on the receiving end of hostility or death threats has become part of their everyday reality. At the ‘Mayors’ Talk’ at the NOW Conference local politicians from Germany, Italy, Slovenia and Lebanon reported on their experiences – of ethnic conflicts, right-wing populism and hate speech. They spoke about what they would like to change about their everyday reality in the future and how they could be supported.

The long-standing involvement of former German district administrator Tjark Bartels in the integration of refugees and his commitment to establishing a learning facility at one of the largest former Nazi rally sites met with resistance. When, through a fatal misjudgement at the Youth Welfare Office, a child became the victim of a sexual crime, he as head of the authority received death threats. “The limits of tolerance are overcome if personal integrity has been damaged.” says Bartels. It is important to take action against proponents of hate speech on social media. Solidarity is equally critical, however, to break the power and impact of the slander. “Yet many lack the courage to show solidarity out of fear of the spotlight falling on them,” as Bartels knows from experience.

Isabella Conti, Mayor of San Lazzaro di Savena in northern Italy, is only too familiar with hostility. When she used a confiscated, empty Mafia villa as accommodation for refugees the attacks by Lega sympathisers and right-wing extremists on social media reached a new dimension. “The real challenge is to rid the local population of their fears of everything foreign,” explains Conti, “and to make it clear to them that the path can only be formed by inclusion and refugee admission, not by rejection and isolation.”

Igor Marentič, Mayor of the Slovenian town of Postojna, has experienced how difficult an election campaign becomes when opponents spread untruths via the media and on social media: factual issues are submerged, and the strain is scarcely bearable – including for family. “The pressure is especially intense when lies are being spread and you can’t do anything to prevent it. Those who shout the loudest always win here,” says Marentič.

Mohammad Saadie, President of several communities in northern Lebanon, has dedicated himself to fighting corruption, in the process making a huge list of political enemies. Promoting transparency in a country with over 30 parties that is also currently deeply mired in an economic and political crisis is no easy undertaking. Saadie is convinced, however: “Every member of the population needs to know what’s going on with public funds”. The communal decision-making processes in his communities therefore operate transparently – including live transmission of municipal council meetings and detailed lists of all tasks.

Communities in particular play a key role in promoting social cohesion and overcoming divisions. The annual NOW Conferences therefore focus on peaceful coexistence at the local level. “This is exactly where different people meet each other. And it’s also where conflicts often arise,” was the analysis from researcher Regina Arant from Jacobs University Bremen. “In communities where there are high levels of social cohesion people are happier. The acceptance of diversity is also a crucial aspect,” is the key message from Arant’s current diversity research.
Further Information:www.now-conference.org/vienna2020