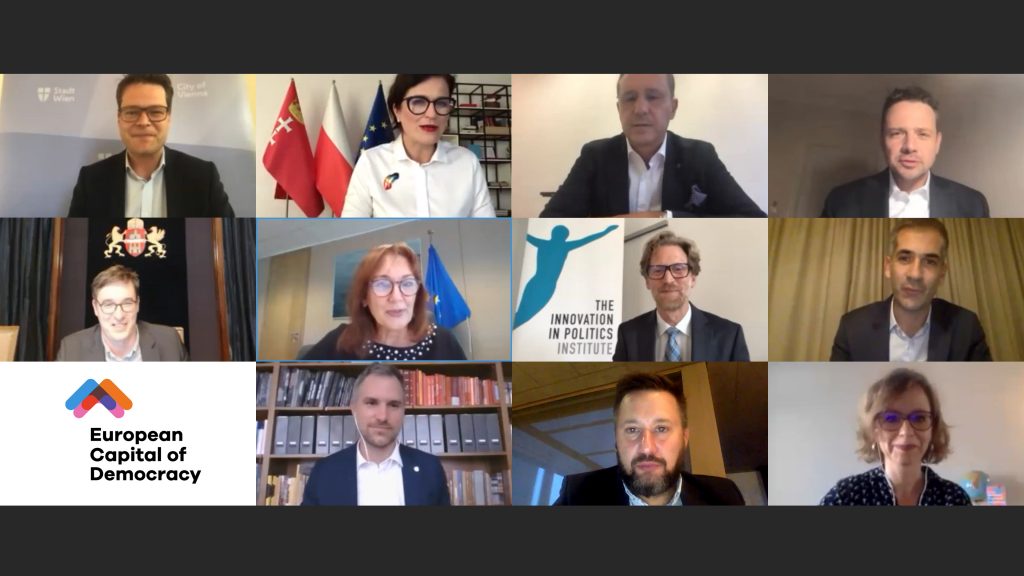 Starting in 2021: every year, a city in Europe will takes centre stage in moves designed to improve democracy, supported by international organisations and civil society.

Vienna – Mayors from more than 15 European countries launched the European Capital of Democracy initiative on Friday. From autumn 2021, each year a European city will receive this title and commit to starting new projects geared towards strengthening democracy in its sphere. The main topics of the annual programme will be new technologies, climate change, citizen participation and education.

International organisations and foundations will be invited to stage their own activities in the selected city, such as youth gatherings, fairs or culture festivals. “Democracy is under attack, and now it is striking back. Each European Capital of Democracy will become the place to be for people in Europe who want democracy to become stronger – across party lines and national borders”, the head of the initiative, career diplomat Helfried Carl, predicts.

The initiative was launched under the patronage of the Secretary General of the Council of Europe, Marija Pejčinović Burić, and European Commission Vice-President Dubravka Šuica, at the invitation of the Mayor of Vienna, Michael Ludwig.

The initiative has already gained the backing of mayors and other leading politicians from numerous cities: Athens, Bratislava, Budapest, Frankfurt, Gdansk, Istanbul, Paris, Prague, Sofia, Strasbourg, Tirana, Vienna and Warsaw. At the launch in Vienna – which was switched to a digital format due to the Covid-19 pandemic – the mayors presented their vision for the initiative.

How cities will be selected: each application must include the city’s self-evaluation of its democratic track record and an outline for a year-long programme aimed at strengthening and broadening democratic practices. Based on transparent criteria, a group of experts will draw up a shortlist from all applicants. Finally, a jury of 10,000 citizens, representative of the European population, will select the title holder from the year 2023 onwards.

“In the first two years, 2021 and 2022, while we are developing the extensive selection process, two cities will lead the way in bringing this initiative to life and showcasing what is expected from future title holders. We will present these cities by the end of this year”, says Helfried Carl, outlining the next steps.

What European Capitals of Democracy do: the cities that hold the title will work on two levels. Firstly, they will implement their own programmes. Each city will develop, curate and organise a wide range of activities and events together with civil society, citizens and local partners. Citizens and politicians from other European countries will then be invited to experience these efforts first-hand and to participate. Secondly, the cities will serve as the stage for European discourse on strengthening democracy, hosting various initiatives, projects and events organised together with The Innovation in Politics Institute and other international organisations and foundations.

Programme focused on four main topics: technology, climate change, education and participation: the programme envisaged for the first Capitals of Democracy will focus on four key topics. A “technology track” will concentrate on the challenges and opportunities for our democracies resulting from the digital revolution, including artificial intelligence and disinformation. In the “participation track”, the Capital of Democracy will implement new measures to improve citizen participation, such as citizens’ assemblies and participatory budgeting. As climate change will be a major factor in democratic developments, each city is encouraged to feature inspiring flagship projects aimed at addressing this problem. And in the “education track”, schools from other cities and countries will be able to participate in activities in the European Capital of Democracy, both on site and online.

Helfried Carl describes the long-term goal of the initiative: “An increasing number of politicians and citizens are asking themselves what can be done to improve democracy. With our initiative, we will create a space where innovators from all over Europe can meet every year, share best practice and start new forms of democratic engagement. To survive, democracy has to advance. This is what the cities participating in the initiative will aim for.”

Marija Pejčinović Burić, Secretary General of the Council of Europe
“It will provide the dual benefit of highlighting democratic initiatives and serving as a catalyst for more, as cities compete to hold the title – and then reap the benefits that come with holding it.”

Dubravka Šuica, Vice-President for Democracy and Demography, European Commission
“In these extraordinarily difficult and uncertain times, seeing this initiative taking shape and reaffirming the crucial role of our cities as strongholds and laboratories of democracy is reassuring and promising.”

Kostas Bakoyannis, Mayor of Athens, Greece
“Democracy, with the clear reference to its roots in ancient Greece and particularly in Athens, is very often an ideal that requires effort from everyone in order to become reality and to thrive.”

Aleksandra Dulkiewicz, Mayor of Gdansk, Poland
“Democracy is not something given to us for good. It is not something to be taken for granted. It is a right that we must fight for and protect every day. We need to care for, nurture and strive for democracy. But also celebrate it. That is why initiatives such as the European Capital of Democracy initiative launched by Vienna are so important. I wholeheartedly support this project.”

Yordanka Fandakova, Mayor of Sofia, Bulgaria
“In our Europe, democracy is not a concept, rather it is about participation and policies that improve quality of life. The key to achieving this goal is to highlight best practice and efforts in the fields of policy, education, culture, social inclusion and innovation.”

Peter Feldmann, Lord Mayor of Frankfurt am Main, Germany
“Democracy must be fought for and defended anew every day, in a civil discourse between citizens with equal rights. This is exhausting, it can be a pain in the neck – but it will always be worth it.”

Zdeněk Hřib, Lord Mayor of Prague, Czech Republic
“Today’s cities are still places where the real problems of real people are actually solved, regardless of the high-level ideology of national politics. I truly believe that this approach can bring about desirable change in our society.”

Ekrem İmamoğlu, Mayor of Istanbul, Turkey
“As the Istanbul Metropolitan Municipality, we gather around the table and find solutions to problems together. I call it ‘brave democracy’. We act on the principle of providing equal services for everyone, regardless of a person’s beliefs, ethnicity, political views or personal preferences.”

Gergely Karácsony, Lord Mayor of Budapest, Hungary
“To find a way out of the current crisis of democracy, we need to invest in citizen engagement. It is much easier to engage citizens in the political process at the local level, so cities can play a major role there.”

Michael Ludwig, Mayor of Vienna, Austria
“To be successful, a city requires participation and cohesion; it must have the objective of enabling its citizens to shape their city together. The European Capital of Democracy initiative is standing up for a strong Europe with resilient democracies based on our common values of social equity, wellbeing and human rights.”

Poland Hermano Sanches Ruivo, Deputy Mayor for European Affairs, Paris, France
“We can’t take Democracy for granted, we have to fight for it. Especially during these times of populism. One way of doing this, is giving the floor to citizens. Citizens know their district, their streets – they know what’s important. The city on the other hand has the capacity and the budget to implement their wishes.”

Rafał Trzaskowski, Mayor of Warsaw, Poland
“I believe that it is time for a new solidarity. New European solidarity. We have to give our democracies new meaning and take them to a better place together. Therefore, I am certain that the European Capital of Democracy initiative is a path that will lead to us regaining trust in democracy – without doubt the best form of government.”

Matúš Vallo, Mayor of Bratislava, Slovakia
“I am a big believer in engaging people in the development of cities and the places where they live. Authentic and transparent local politics will help to restore trust in democracy.”

Erion Veliaj, Mayor of Tirana, Albania
“As a true advocate of cities becoming more inclusive, more responsive to people’s needs, more open and more transparent, I welcome and support the European Capital of Democracy initiative, a much-needed one for young democracies such as Albania’s, but not only for them.”

Lech Wałęsa, former President of Poland and Nobel Peace Prize laureate
“To defend the free and open world we need to firmly stand up to challengers who see our values and way of life as a threat. We need to make people feel once again that institutions represent them and are accountable to them.”

About the Innovation in Politics Institute
The Innovation in Politics Institute is an international non-governmental organisation that identifies, develops and implements innovation in politics in order to strengthen democracy in Europe and beyond. With a Europe-wide network of offices and partner organisations in 15 European countries (Austria, Belgium, Bulgaria, Finland, France, Germany, Greece, Ireland, Italy, Lithuania, Poland, Slovakia, Sweden, Switzerland and the United Kingdom), and together with political leaders at all levels, the institute is building tomorrow’s politics, today. https://innovationinpolitics.eu/