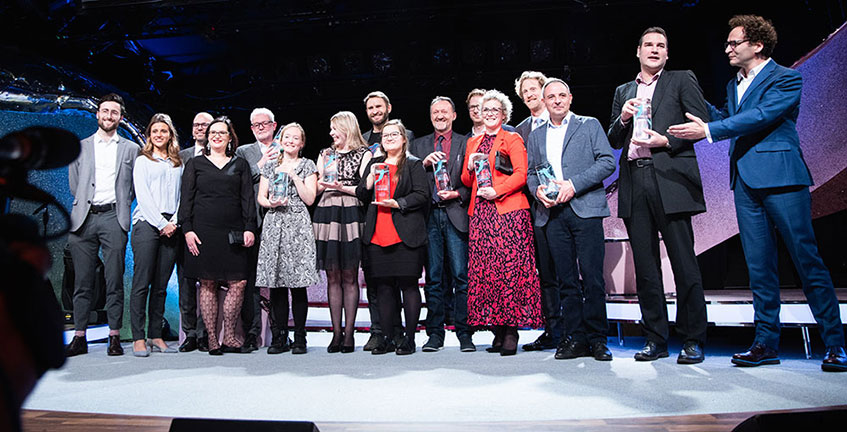 This year, the Innovation in Politics Awards for the best political projects from all over Europe were presented in Berlin. Out of over 400 nominees, 80 finalists and eight winners in eight categories were selected by a jury of more than 1,000 European citizens. The international gala took place in the Tipi at the Chancellery in Berlin under the joint patronage of the German Federal President Frank-Walter Steinmeier and the Austrian Federal President Alexander Van der Bellen.

Berlin, 5 December 2019 – Since 2017, the Innovation in Politics Awards have been honouring successfully implemented political initiatives – regardless of party affiliation, political level or region. The aim is to strengthen, further develop and inspire democratic politics. More than 550 guests, including parliamentarians, mayors and members of government from a total of more than 20 European countries, met with the creators of exemplary projects in the Tipi at the Chancellery – from the Finnish city, which makes a profit by reducing CO2 emissions, to the municipal refrigerator from England, which ensures that no more food is thrown away, or the municipal council in the Netherlands, where citizens and politicians sit shoulder to shoulder, to safe ports and smart cities in Germany. (This time five/seven projects from Austria/Germany made it to the final). Already in the afternoon an exchange on the details of all projects between 500 interested people took place in the context of an international conference.

Patricia Kahane, founder of the Innovation in Politics Institute, Michael Müller, acting Mayor of Berlin, Dorothee Bär, Minister of State for Digitisation and other personalities acted as hosts in Berlin. The keynote speech was given by Hilary Cottam, the world-famous British social entrepreneur and author. The Innovation in Politics Awards 2019 took place under the joint patronage of the German Federal President Frank-Walter Steinmeier and the Austrian Federal President Alexander Van der Bellen.

The jury consisted of more than 1,000 Europeans who awarded their points in an online evaluation procedure. The winning projects were selected in eight categories and this year come from Bulgaria, Finland, Germany (2), Italy, Lithuania, the Netherlands and the United Kingdom.

Edward Strasser, co-founder and CEO of Innovation in Politics Institute: “We give courageous politicians and their extraordinary projects a Europe-wide stage. In this way we ensure that exemplary political work can be emulated in other countries. Several of the award-winning projects have already been implemented in other countries.”

The winning projects by category are:

Trust is crucial in life – and in politics. The open citizens’ council in Groningen builds trust between citizens and politicians. When they sit shoulder to shoulder in the local council and decide together, a joint sense of responsibility quickly develops. The citizens are chosen at random in order to motivate a variety of people to participate. An evaluation by the University of Groningen showed increased trust on all sides, more active voting behaviour and a stronger community.

FabriQ is the first business incubator for social innovation in Milan. It offers economic incentives and support for companies that develop projects with a high social impact. Startups are encouraged to find new solutions to the challenges of our time and implement them economically – with a direct impact on collective cohesion in their district and throughout the city. Since 2013, FabriQ has supported more than 60 young companies in socially sustainable projects.

Ii in Finland is to become the world’s first city without CO2 emissions. In a joint action of all citizens, Ii has already significantly reduced its emissions, thereby also saving half a million euros. Public buildings use renewable energy supplied by the local bioenergy producer. Children measure the consumption of water, heat and electricity in schools. New, fast bus
lines reduce the use of private vehicles. In workshops, citizens learn how to repair equipment and clothing. Today, li produces ten times more energy than it consumes – and has also reduced taxes.

The “Safe Harbours” campaign is a project of the NGO Seebrücke (sea bridge) to decriminalise sea rescue and the creation of safe escape routes to Europe. It establishes local reception programmes for refugees. 70 German municipalities, cities and districts have already declared themselves as “safe harbours”. At the Seebrücke Congress in Potsdam, 12 cities formed an alliance with the German government to develop local reception programmes. The campaign is a democratic joint project of the cities and civil society.

In 2016, the local council of Frome, supported by Edventure Frome CIC, installed the first community refrigerator in the UK to reduce food waste and promote solidarity. Volunteers fill and clean the fridge daily in collaboration with local shops. This means that 90,000 fewer items are wasted every year and greenhouse gases are reduced by 140 tonnes. In 2018, a community pantry was opened for goods that do not need refrigeration. The refrigerator and pantry are open daily for everyone. As a result of this success, a further 60 community refrigerators have been installed nationwide.

The “Smart City Bad Hersfeld” project links public administration, citizens and businesses in the city to improve living and working conditions. With 30,000 inhabitants, it is the smallest city in Germany to have developed such a programme. A digital parking guidance system optimises the use of space and the finding of a parking space. Municipal charging stations for electric cars promote environmentally friendly transport. “Smartboxes” on main roads collect data on traffic noise and waste materials for effective environmental management. Free Internet in the city centre motivates everyone to use such services.

In the Bulgarian city of Rila, tourists with disabilities can book personal guides as helpers. Initially, 30 unemployed people were trained as tour guides for this project. The project thus also opens access to the labour market and social integration for unemployed and inactive people, as tourism offers very good opportunities for medical-social and psychological rehabilitation.