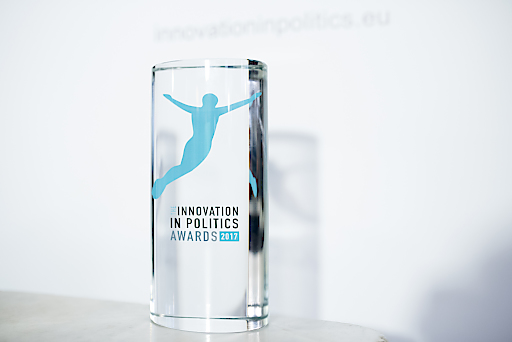 London, 25 April 2017 – From today until 31 July the Innovation in Politics Awards will be looking for innovative policy projects in the UK to be nominated. Winners will be announced at an awards ceremony in Vienna on 6 December. The new annual awards for creative and courageous politicians all over Europe will be chosen by a jury of 1,000 citizens from all over Europe.

This political Award is the flagship project of a larger new initiative, The Innovation in Politics Institute. With formal representatives in eight countries, including the UK, the Institute is based in Vienna, but aims to work on a nonpartisan, pan-European level. Its mission is to enable courageous politicians from different countries to share best practice, to network and to build bridges.

The founders’ goal is a fundamental renewal of political work in Europe. “Many factors have contributed in recent years to citizens doubting mainstream politics. In a daily onslaught of information, not all of which proves to be factual, we have seen a general mistrust in politics and politicians develop. The British referendum to leave the EU was just one example, we have seen
similar trends in the election campaigns in the US and France. Our democracies will not be able to withstand the mix of populism, snap judgements and fake news in the long run unless we rebuild trust and renew our political systems”, says David Schoibl, country coordinator for the Institute
in the UK.

The Innovation in Politics Awards want to help rebuild trust and offer support to those who combine innovation and best practice. Nominated politicians or political appointees should have introduced or supported projects which made an impact and achieved change for a community, whether on local, regional or national level or pan-European level. David Schoibl explains ‘‘Politicians today face financial restraints and often tricky national policy frameworks, which limit what they can do. This is where courage and vision are needed – we want to encourage projects that open up spaces and dare to explore new ground.”

In the UK, policy innovation often originates from innovation agencies, think tanks and the Third Sector. The Innovation in Politics Awards fill a gap, as they focus on politicians’ role in kick-starting or supporting initiatives which make a difference.

Nominated projects will be invited to make a formal submission to the Awards. Out of all submissions received, a Jury of 1000 citizens will pick a shortlist of finalists. Winners will be announced at the December ceremony. In addition, all finalists will be invited to join a pan-European network, which will continue to identify and promote new political solutions to improve citizen’s lives.

“We are asking citizens from all over Europe to participate in the Jury, as citizens participation is an important element of achieving results”, describes Edward Strasser, founder of the initiative in Austria.

Strasser adds: “We will support the builders in Europe, and highlight how politics can work and renew itself. We have a fact-based approach to trumping the destroyers who seek to destabilize democracy. To do this, we will make sure that successful and effective solutions in politics get to be seen by a wider public and across borders, so they may serve as inspiration for others.”
The Innovation in Politics Awards will be presented in nine categories, like “Jobs”, “Quality of Life” and “Human Rights”. The jury scores points according to six criteria: Innovation, Build Bridges, Trust Building, Participation, Sustainability and Financial Viability.

“There are several extraordinary political projects in the UK, on all levels of governance and independent from party affiliation. Whatever the future Brexit negotiations bring, we want to make sure UK politicians’ work is seen, and UK politicians are part of the long-term network of innovation and sustainability we want to create across Europe.”, says David Schoibl. “But we also want UK citizens who are interested in the political process to apply for our citizen’s jury – no jury member will get to score projects and politicians from their own country, so being a juror is also a chance to learn first-hand what’s happening in other places in Europe and to take inspiration from that back to your own communities”, he adds.

The Institute is working to involve political networks from all UK parties, umbrella organisations and think tanks from a wide variety of political viewpoints, in order to identify nominations for 2017.