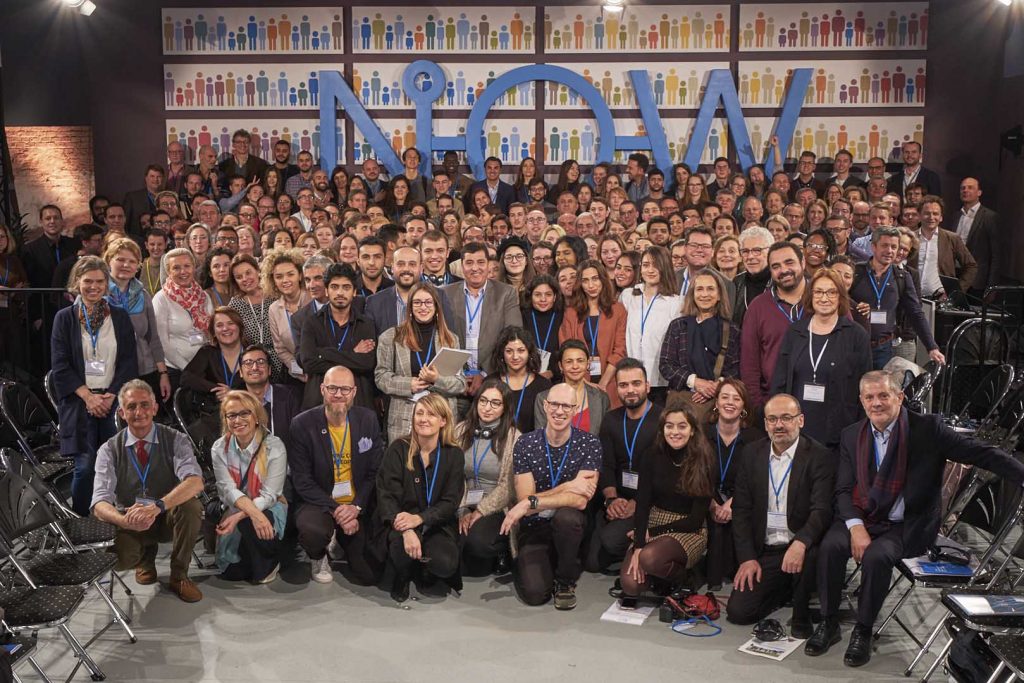 Open, inclusive, candid and on equal terms: the 7th International Mayors’ Conference NOW offered innovative formats in order to provide space for encounter and find ways to overcome division. From 16 – 18 February, 220 participants from over 30 countries from Europe, Turkey and the Middle East pondered how to best promote social cohesion, facilitate participation and enact change in a time marked by division. Mayors and municipal decision-makers, young people, representatives of NGOs and numerous international experts entered into a dialogue in the course of the conference.

More than ever before, tensions and growing divisions are endangering our societies. Hate speech, social media filter bubbles, incitement to antagonize each other based on cultural, social, economic and religious differences have become everyday phenomena. Finding ways to bring people together is crucial: at “Space for Encounter – Overcoming Division“, the International Mayors’ Conference NOW, hosted by Act.Now for the seventh time, mayors, young citizens from all walks of life, community workers, innovative NGOs, renowned researchers and practitioners, social entrepreneurs and urban planners from the Middle East to Northern Europe came together to work on how social cohesion and youth participation in wide-reaching decisions can be established at the local level. Uniting people from diverse backgrounds for a shared goal is the objective of the two-day conference in Vienna.

The event took place under the auspices of Austrian Federal President, Dr. Alexander Van der Bellen, and was organised in cooperation with the City of Vienna, represented by Mag. Jürgen Czernohorszky (Executive City Councillor for Education, Integration, Youth and Personnel) who opened the conference together with Mag. Doris Schmidauer, and Act.Now co-founder, André Heller. “We are convinced that the young generation is the key to shaping the future. I am personally deeply moved to see so many young participants here,” said the multimedia artist during the Opening: “It’s up to us to change what doesn’t feel right for us or our planet.”

“Sparkling Inputs” – short inspiring speeches – introduced new perspectives, showcased solutions and provided inspiration as well as ample material for discussion to all attendees. One of the speakers, researcher Regina Arant, from Jacobs University Bremen, discussed her findings about social cohesion and peaceful coexistence at the local level, themes crucial to the NOW Conferences. She said: “[The local level] is exactly where different people meet each other. And it’s also where conflicts often arise”. Arant’s key message was, “Where there are high levels of social cohesion people are happier”.

The conference also featured 20 Promising Practices: Promising Practices are living examples in the areas of youth participation, social cohesion, education, and integration. These exemplary methods and ways of action aim to inspire others to follow suit.

One Promising Practice, presented by Act.Now, was ‘Athens Open Schools’: The City of Athens decided to tackle the issue of having a lack of public space for encounter. They addressed this problem by using school buildings after regular school hours as meeting points for recreational, cultural, educational and sports activities.

Workshops: Getting Down to Business

Since one of the main goals of the conference is to bring actual improvements at the local level, 24 interactive workshops took place. They operated under the premise “From Knowledge to Action” in order to allow participants to experience the themes first hand and transform all the newly gained expertise into action and tangible change back home. These laboratories offered a wide range of topics, from strategies on how to involve youth in policy-making to exploring new methods on how to fight against the rise of polarisation to playing a boardgame that was created to involve citizens in urban design processes.

Mayors face a lot of pressure from the public; at times they are subjected to hostile verbal attacks or even death threats. Isabella Conti, Mayor of San Lazzaro di Savena (Italy), Tjark Bartels, former Head of Administration of Hameln-Pyrmont District (Germany), Igor Marentič, Mayor of Postojna (Slovenia), and Mohamad Saadieh, Mayor of Dannieh (Lebanon) took part in this discussion about some of the challenges they are facing. During this talk, they reported on their experiences with ethnic conflicts, right-wing populism and hate speech, and deliberated possible solutions.

Isabella Conti, who has been highly familiar with hostility, since she used an empty Mafia villa as accommodation for refugees, said: “The real challenge is to rid the local population of their fears of everything foreign and to make it clear to them that the path can only be formed by inclusion and refugee admission, not by rejection and isolation.”

Mayors, practitioners and young people discussed key conference findings in order to connect the conference and the actions of the participants at the local level.

George Antoun, Country Director & Regional Programme Advisor, Mercy Corps Lebanon and Host of the NOW Mayors’ Network, was one of the discussion participants. He encouraged youth participants to continue to speak up and work towards change. “Youth should shout, and shout very loudly, all the time. If you don’t say anything, no one is going to give you attention,” he said: “My advice would be to be conscientious about what you ask for, get very well organised, use as much specialisation and experience as possible, learn from each other, and never get discouraged. People will hear you at some point.”

Youth & Mayors’ Manifesto: The youth is not the future, it is the present

One conviction of the NOW Conference is that integrating young people’s knowledge, insights and concerns is vital to shaping the future. Therefore, we brought together 11 focus groups of young people in 8 countries to give them a say and discuss on how to overcome division and create space for encounter. In several working sessions in the course of the conference the youth participants were able to further develop their ideas and present them in creative ways during the opening of the NOW Conference. Following this, youth participants and mayors joined forces to develop a “Mayors’ and Youth Manifesto” for communities. Some of the core messages of the manifesto were that it is crucial to “talk to [young people], listen to them, inform them, try to implement their ideas. When they are not listened to, speak up for them. Give them a chance to improve their skills, to mix with others, to spread peace & love across borders. Stop saying ‘the youth is the future’, it is the present.“ 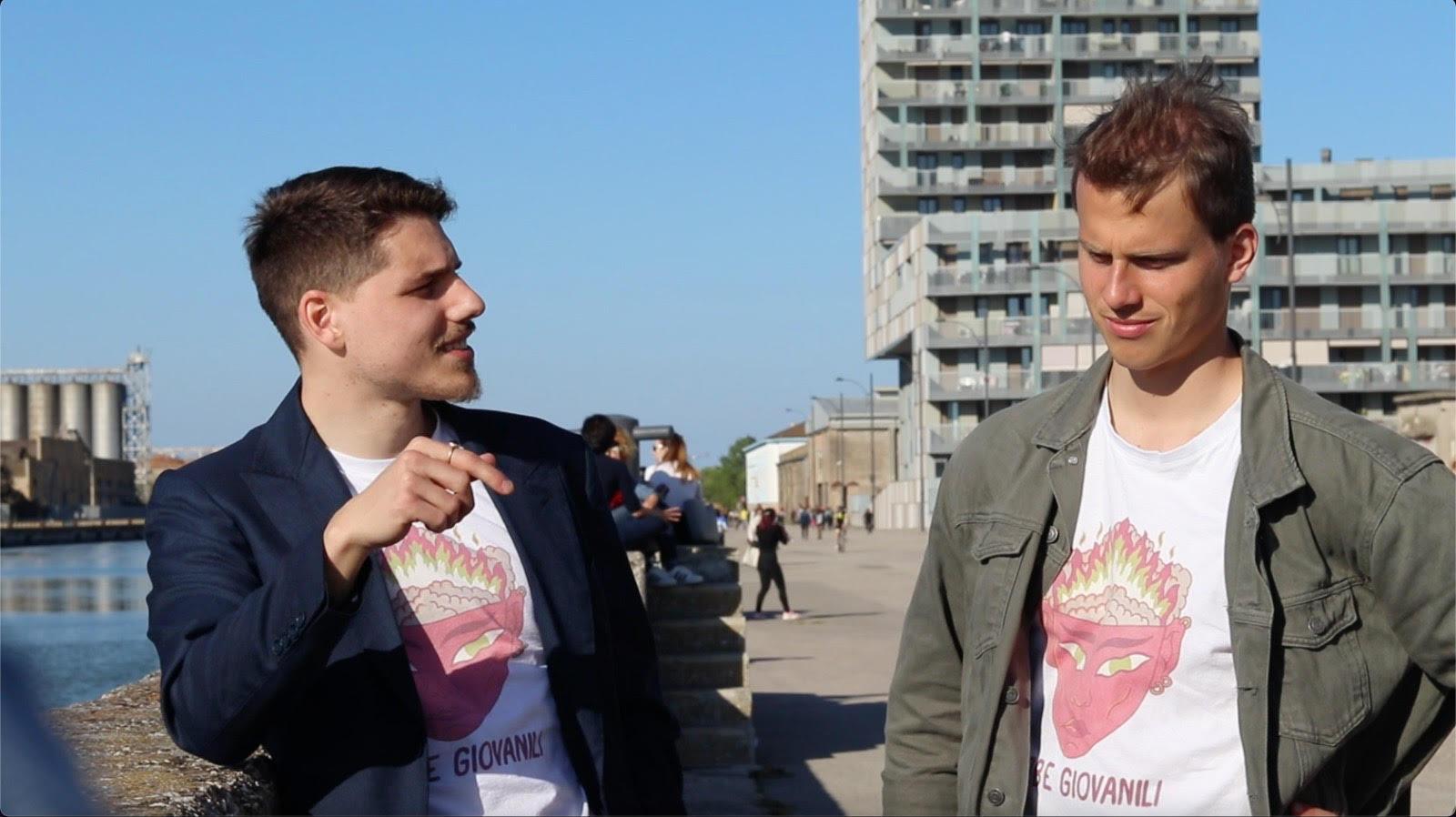 How friendship can strengthen youth activism

Edoardo Caroli and Ilario Salvemini are the founders of Turbe Giovanili (Youth Turmoil), a project created by young people for young people with a passion for politics.

COVID-19: The difference between living IN and living AS a community

The global pandemic of COVID-19 has not only made a lot of shortcomings around the globe visible, it has also shown a lot of engagement, selflessness and empathy from the people impacted by it.