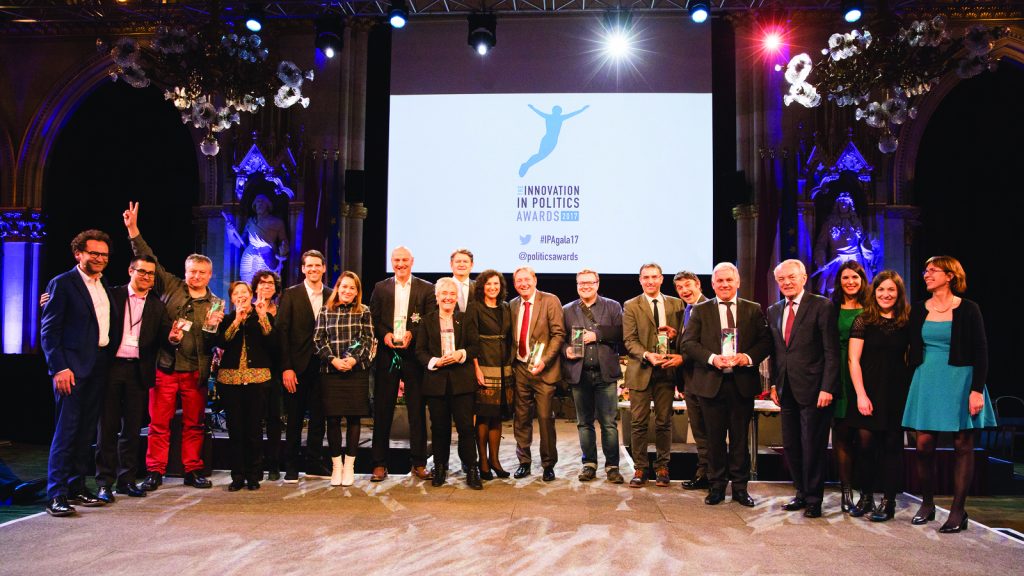 Out of 589 nominated projects, a jury of 1,022 European citizens has selected 80 finalists, representing a wide spectrum of political work. The eight winners will be announced at the evening gala in the Vienna City Hall. Earlier, at the get-together “Politics, Coffee and Cake” more than 150 politicians, experts and journalists from all over Europe discussed the findings of these best-practice projects.

Vienna, 6 December 2017 – The Innovation in Politics Institute has established a pan-European award which is being held for the first time this year: The Innovation in Politics Awards. The most courageous and creative political projects in Europe were identified – regardless of party affiliation and regional level – and presented to a wider public, so that they can serve as a source of inspiration for others in politics and society.

80 finalists in eight categories – no submission in the category “Freedom”

The new annual awards for creative and courageous politicians were chosen by a jury of more than 1,000 citizens from all over Europe. The jury scored points according to six criteria: Innovation, Build Bridges, Trust Building, Participation, Sustainability and Financial Viability. The result: a shortlist of 80 finalists out of 589 submissions for the Innovation in Politics Awards. At the awards ceremony in the Vienna City Hall the winners will be announced in eight categories: Civilisation, Community, Democracy, Ecology, Human Rights, Jobs, Prosperity and Quality of Life. There was no submission in the ninth category, “Freedom”.

In the afternoon before the evening gala, at “Politics, Coffee and Cake” the finalists of The Innovation in Politics Awards 2017 presented their findings to selected experts, politicians and journalists from several European countries in a typical Viennese coffee house. The finalists were from: Austria, Belgium, Bulgaria, Croatia, Denmark, Estonia, France, Germany, Greece, Ireland, Italy, Poland, Spain, Sweden, Switzerland, United Kingdom.

The Innovation in Politics Awards

The Innovation in Politics Awards want to support the rebuilding of trust in democratic politics and values, and offer support to those who combine innovation and best practice. This political award is the flagship project of a larger new initiative, the Innovation in Politics Institute, founded by a group of private European citizens. With formal representatives in eight countries, the Institute is based in Vienna, but aims to work on a non-partisan, pan-European level. Its mission is to enable courageous politicians from different countries to share best practice, to network and to build bridges.

The Awards are realised with the support of the Kahane Foundation, B&C Foundation and
News on Video.