We present: The ten finalists chosen by the jury in the category “prosperity”

With all their heart: an authentic farmers’ market in an urban supermarket

Municipal councillor and vegetable farmer Denis Digel initiated Coeur Paysan (Farmer’s Heart), a supermarket which belongs to 40 farmers in the Alsace region. Together they bought this former hard-discount food store to sell their products directly. The idea? Ending food anonymity by re-creating links between producers and consumers, restoring food seasonality, and thereby bringing back the links of time, taste and territory. The store, situated in the city of Colmar (125,000 inhabitants with surroundings) offers a very diverse product range covering all food needs. This form of direct distribution enables the farmers to apply their skills and expertise, to get just and fair compensation for their work, to encourage a new form of local economic development and to support the territorial grid. By associating the heart symbol with their project, the farmers remind everybody that their role in society goes beyond productivity. They demonstrate that they also have a responsibility: to feed their fellow citizens with quality products while respecting the environment.

Digital wizard: everything a schoolchild needs to explore the world of bits and bytes

Calliope mini is a microcontroller that has been developed for use in the classroom, starting from primary school. Teachers and schools are vital to conveying digital literacy in a meaningful way. Our mission is to provide every schoolchild from the third grade onwards with a playful approach to the digital world. Calliope is currently equipping pilot schools throughout Germany, helping to change the educational system. The aim is to distribute the Calliope mini to schools all over the country, working together with the ministries of culture and state media centres to permanently anchor more media competency in the curricula. The Calliope mini addresses the creative part of digital education and at the same time provides the basis for digitisation – programming itself – in an understandable way. Just a few clicks and you can create your own programmes. The various functions can be easily controlled by our editors, available on calliope.cc. In no time at all, the star-shaped board transforms into a small robot, plays new music compositions or transmits messages.

Appealing to faraway investors: raising capital for a remote location

Angus is located on the east coast of Scotland with a population of 116,200. In this remote setting it is difficult to attract funding for any project. In 2014 Angus Council started looking into alternative solutions and developed Crowdfund Angus. This platform is for individuals, communities and businesses to raise the funding they require. Showcasing local projects using video, blogs and social media tie-ins, it is the first platform of its kind in the UK delivered by a local authority. Since the launch £145,000 has been raised, levering in an additional £460,000 from investors, funders and communities. The Council provides advice and support, promoting business development and job creation in a practical, cost-efficient way. In addition to new funding, the portal develops its users’ marketing skills. Furthermore, it puts a remote region on the map and enables it to build international links. The crowdfunding process also gives project plans validation – when projects can get crowdfunding they also gain the credibility to unlock traditional funding methods.

“Speed dating” for non-profits and companies: sounding out opportunities for cooperation

Politicians and the administration of Bocholt have recognised the immense importance of volunteer work for the city. Since 2012 Bocholt has been taking measures to promote, support and recognise volunteer work. In 2017 local companies were integrated into this concept. The Marketplace for Good Business brings together local non-profit organisations and companies in a kind of speed dating. Two points are of particular importance: each party has to make an offer to the other one; this creates a level playing field where everyone has something to give. And, most importantly, money is taboo! Everything can be discussed, but not money. This creates new cooperations and ways of working together. Often, after personal discussions, new ideas are developed and projects are created. It’s all about mutual support. Partnerships are being formed between voluntary organisations and the local economy, which can and should continue beyond a one-off project. Representatives of 37 organisations and 29 companies took part in the event.

Council-owned utility: energy from renewable sources at an affordable price

Nottingham City Council identified a problem holding both residents and local businesses back. A highly concentrated and largely privatised energy sector in the UK resulted in one of the highest energy prices in Europe. In response, the Council launched the first council-owned energy firm, Robin Hood Energy, in late 2015, the first such company since the UK market was nationalised in 1948 and later privatised. The locally owned new mutual energy company is now using locally generated energy from waste-to-energy and solar sources and acting as a retailer buying energy from the market, and is effectively reducing energy cost for residents and businesses. Holding a firm belief that it is unacceptable that any family today should have to choose between food and fuel, Robin Hood Energy is operated on a not-for-profit basis as a wholly-owned subsidiary of Nottingham City Council. Its mission is to provide low-cost electricity and gas to households and businesses in the East Midlands and beyond.

Dependency on bank credit or loan sharks is a major problem in the UK and contributed to the financial crash in 2010. Credit unions are a mutual alternative. Salford Credit Union was a well-kept secret until its new Board in 2012 started to raise public awareness of the benefits of joining it. The Union is now committed to becoming the lender of choice for everyone who lives or works in Salford. The Board has transformed its operations with the support of local partners that share a common vision for tackling loan sharks, excess debt and financial exclusion. Cooperation with Salford City Council, community committees and registered social landlords has led to significant involvement in local events. The Union now operates weekly services in council service centres to give more people access and has also expanded its product range: it can now send funds electronically to bank accounts and offers a pre-paid debit card that can’t be overdrawn. In autumn 2016 it upgraded its systems so members can now join and apply for loans online.

The Bristol Pound (£B) is a local complementary currency or community currency launched in 2012. Its objective is to encourage people to spend their money with local, independent businesses in Bristol and the former County of Avon. George Ferguson, Mayor of Bristol between November 2012 and May 2016, has contributed to £B’s success through his political support and by accepting his Mayor’s salary wholly in £B. The use of a community currency not only stimulates the local economy, but also creates stronger bonds within the community. Moreover, buying locally decreases emissions through reduced external transport. Generally, internal trade through the use of complementary currencies is a resilience strategy, which reduces the impact of national economic crises and dependency on international trade by enhancing self-sufficiency. Finally, the use of a local currency increases the awareness of the impact of one’s economic activity. The Bristol Pound contributed to Bristol being awarded the title of European Green Capital 2015.

Estonia faces the serious problem of a very high share of young people who are not employed or in education / training programmes (NEET youth). In 2016 the rate was 13.8%. Moreover, criminal activity of non-Estonians is on average 50-60% higher than that of Estonians. Most of them do not speak Estonian at all or not well, therefore they have fewer options on the job market and bigger socio-economic problems. In order to overcome the issue of NEET juvenile delinquency, Tallinn City explored ways to replicate the UK model of the Skill Mill. The Tallinn Skill Mill partnership includes city departments and different public, private and non-governmental actors. It is coordinated by an advisory board as in the UK. The target group are young ex-offenders: 18–24 years olds with low skills and poor educational outcomes, former NEETs with several custodial sentences, at the start of their employment. The programme provides employment in waterway clearance and land management. Successful trainees are offered a ‘next step’ job with a Skill Mill partner.

Dedicated test location: a shop for rent to try out new business ideas

The “Testeur de commerce” (shop tester), open since 2015, is a commercial area designed to allow experimenting with new business concepts. Covering 65 square metres and located in the 10th “arrondissement” (district) of Paris, the Testeur enables entrepreneurs or project developers to test innovative, responsible and fair new forms of business. It can be rented for periods from two weeks to four months. The Testeur has already allowed 16 project developers to test their concepts. Benefiting from this success, a second Testeur opened in mid-June 2017 in the 17th district and a third, specialised in artisan goods, will be established at the Viaduc des Arts in the 12th “arrondissement” by the end of 2017.

The county of Ebersberg has set the ambitious target of becoming free of fossil fuels and finite energy sources by the year 2030 through energy efficiency, energy saving measures and the production of energy from renewable sources. Energy is to be generated in the county, distributed through local grid infrastructures and run by municipal utility companies. In this way, the energy transition will also create local added value. To implement these goals the municipalities are working together to establish a power supply company that will allow them to produce and distribute energy from the region for the region. The municipalities decided in favour of a Virtual Power Plant as a first building block for Ebersberg’s Regional Utility. The Virtual Power Plant is to help municipalities engage in a common energy policy at the local level, enable a smooth continuation of the energy transition process by stabilizing the network load with only moderate network expansion, and also generate revenue for the energy transition. 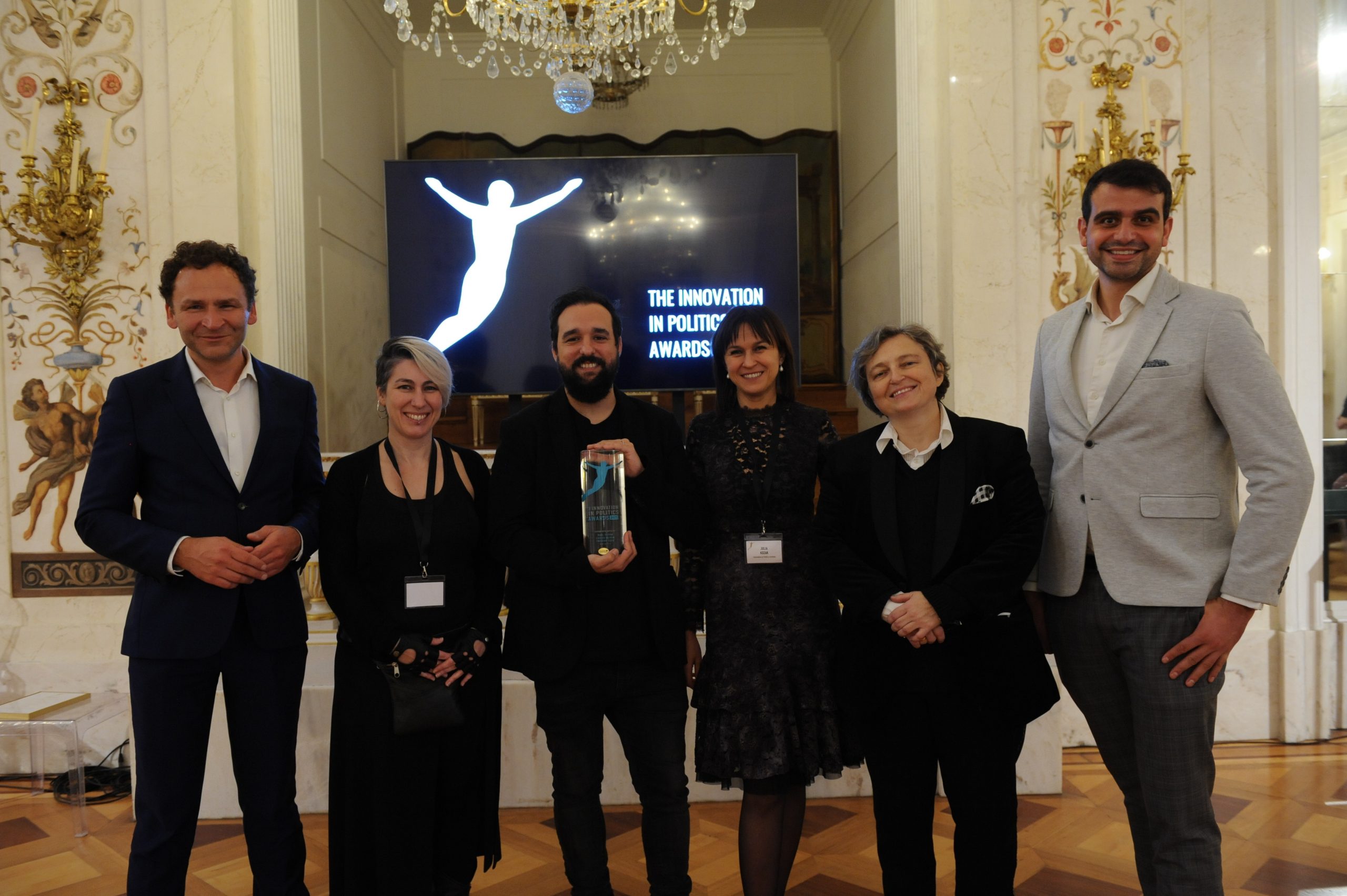 Frena La Curva/Brake The Curve won the 2021 Innovation in Politics award for COVID-19 strategies. The open-source digital citizen’s platform allowed people to cooperate and organise social energy in the face of the COVID-19 pandemic. We spoke to Patricia Horrillo and Raúl Oliván Cortés, part of the team behind the project.