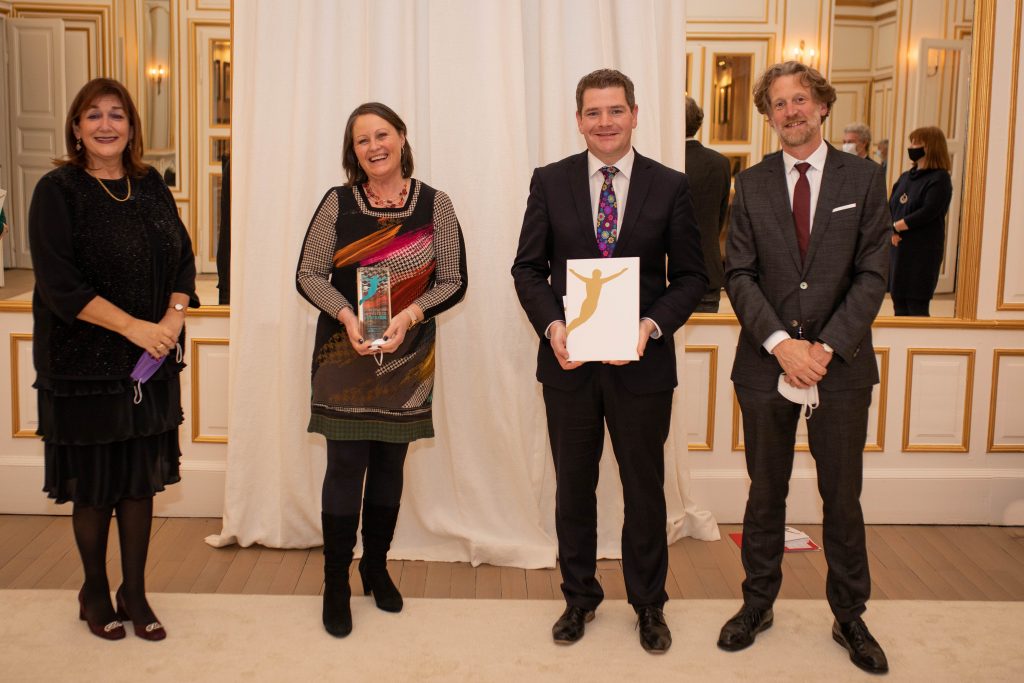 Brussels, 1 December 2021 – An Irish gender equality initiative, SHE (See Her Elected), has been awarded The Innovation in Politics Award in the Democracy category for their work to increase the representation of women in local politics.

Ten projects from Germany, Ireland, Poland, Spain and the UK made it through to the 2021 Democracy finalists. The finalists and the winner were selected by a European jury of 1,032 citizens earlier this year.

Ireland’s Minister of State at the Department of Housing, Local Government and Heritage Peter Burke and SHE Programme Manager Michelle Maher were presented the Award in Brussels by Guests of Honour H.E. Dubravka Šuica and Minister of Climate Change, Environment, Energy and Participatory Democracy (Brussels-Capital Region) Alain Maron.

See Her Elected (SHE) is a feminist, community-led and rural initiative which aims to increase the number of women in local politics in the rural Northwest-Midlands region of Ireland, fully funded by the Department of Housing, Local Government and Heritage under the stewardship of Minister Peter Burke.

As of May 2021, 25 % of elected local authority councillors in Ireland were women. SHE engages directly with women in their communities through the innovative SHESchool which offers free online classes to give women the knowledge, confidence and skills they need to participate in local politics. So far, six women have decided to stand for election in the 2024 local authority elections.

European Commission Vice-President for Democracy and Demography Dubravka Šuica said:
“I am delighted to be patron of this year’s Innovation in Politics Awards, which fulfil a vital service in sharing best practices and sparking new ideas in politics across borders in Europe.

The projects in the Democracy category have made a tangible difference in their respective communities by bringing citizens into the heart of decision-making. Engagement with democracy starts at the grass-roots. Indeed inclusion lies at the core of the principles of the Conference on the Future of Europe.

My congratulations go to the winning project, See Her Elected (SHE). It has been truly inspiring to meet the team behind the Irish initiative today and to learn about their work on not only removing barriers for women but actively supporting women in their endeavours to enter politics.

Having been elected as the first female Mayor of Dubrovnik twenty years ago, I am keenly aware of the challenges still facing women in politics today. I am delighted that projects, like SHE, highlight the importance of empowering women to make their voices heard and to be represented in their local communities. This contributes to making our democracy stronger, more inclusive and responsive to the needs of citizens.”

Minister of Climate Change, Environment, Energy and Participatory Democracy (Brussels-Capital Region) Alain Maron said:
“Innovation is important, especially in politics. It is crucial to help build citizens’ trust in their governments and with elected representatives. To awaken citizens to the challenges of our society, it is essential to guarantee that elected politicians are representative of society.

Initiatives such as SHE, which won the prize in the democracy category, are a perfect example of a mobilising and inclusive project that strengthens the democratic participation of women in the management of their local areas. I am proud to be a Guest of Honour at the Awards and to explore with other politicians many new and innovative approaches for more participatory democracy.”

CEO of the Innovation in Politics Institute, Edward Strasser, said:
“2021 has been an extraordinary year for everyone in politics. The Awards received 400 submissions from 25 countries, making it very clear that political professionals throughout Europe are looking for new solutions. For the fifth year running, we are celebrating the most exciting and impact-driven political initiatives across Europe.

All the projects in the Democracy category make their community more resilient and responsive, and for this I congratulate all finalists. In particular, the winning initiative, SHE, has shown great innovation and courage to shake up the system to empower women to participate in local politics, thus increasing the diversity of representation.”

The winners of the Innovation in Politics Awards for the category Democracy, Peter Burke, Minister of State at the Department of Housing, Local Government and Heritage in Ireland said: “We are over the moon with the news that See Her Elected has won the Innovation in Politics Award for Democracy, and we commend the leadership shown by the team across the North West of Ireland.  The Irish Government has prioritised funding for organisations who work towards greater diversity and gender equality in local politics and Department of Housing officials and I have loved working with Michelle and her team. We must continue to support and encourage more women into local politics, until our political chambers reflect the societies they serve.

While progress has been made in increasing the number of women involved in politics, this has been too slow and often limited to the urban areas of the country.  We have also seen issues in retaining the talent already within the system. Targeted, influential organisations such as SHE have been instrumental in encouraging more women to consider local politics, and supporting them to stay on and thrive within the system”.

The winning project team was presented with the Award by the Vice-President for Democracy and Demography Dubravka Šuica and Minister of Climate Change, Environment, Energy and Participatory Democracy (Brussels-Capital Region) Alain Maron.

The 2021 winner of the Innovation in Politics Awards for Democracy:
Ireland: SHE – See Her Elected