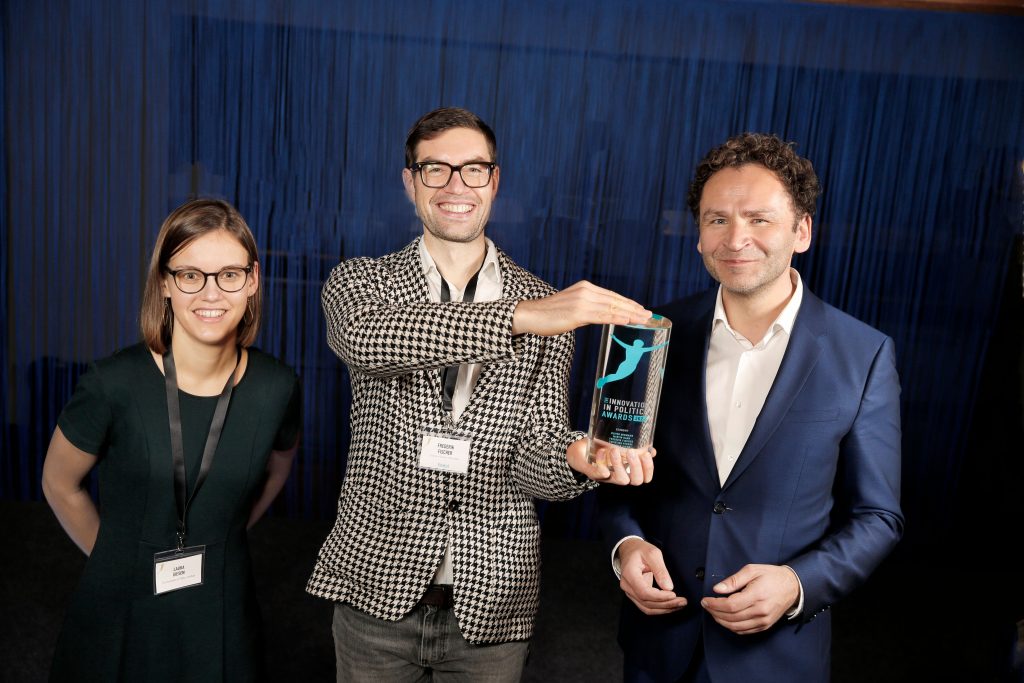 Stockholm, 14 December 2021 – Local leaders of Wittenberge have won the Innovation in Politics Award in the category “Economy” for their pioneering work attracting young digital professionals and start-ups to a small rural town with an ageing population.

Ten projects from Austria, Belgium, Bulgaria, France, Ireland, Germany, Poland and Sweden made it through to the 2021 Economy finalists. The finalists and the winner were selected by a European jury of 1,032 citizens earlier this year.

The winning team, Summer of Pioneers Wittenberge, was announced in Stockholm by the Guests of Honour Barbro Westerholm, MP and former Director General of the Swedish National Board of Health and Welfare (PCC) and Allan Larsson, former Finance Minister of Sweden.

Offering a better quality of life, good rail connections and a location in a UNESCO area, Wittenberge attracted new residents from nearby cities like Berlin and Hamburg. Since June 2020, ten digital workers have formed a community, which now has around 100 members, launching three start-ups, a permanent co-working space and a new cultural hub for the town.

Barbro Westerholm, MP and former Director General of the Swedish National Board of Health and Welfare (PCC) said:
“Political innovation is necessary to help people live the lives they want. The finalists of the Innovation in Politics Awards for Economy, have all shown how we can create positive economic change in our local communities and improve opportunities for all. The town of Wittenberge recognised the potential in their community, using their resources to attract new skills, business and residents to the area. I hope they inspire lots of communities and societies looking to innovate their local economy, especially in rural areas, to never give up.”

Allan Larsson, former Finance Minister of Sweden said:
“Citizens of all democracies have a responsibility to engage themselves and others in the building of a new progressive and inclusive model, in order to create hope and direction in the long-term. Such a model will require a lot of innovation in politics.

It is impressive to see what The Innovation in Politics Institute is doing. The focus on innovation, local implementation and citizen involvement is what is needed in a time of fundamental changes in our societies.”

CEO of the Innovation in Politics Institute, Edward Strasser, said:
“Amidst the COVID-19 pandemic, local innovation in economy has been vital to keep our communities going. All ten finalists of the Economy category have shown what extraordinary things can be done to accelerate economic growth during a challenging time.

The local leaders of the winning project in Wittenberge, Germany, have thought outside of the box to bring new and exciting business opportunities to their town, while offering young professionals a change in lifestyle and better work-life balance. I congratulate the team on their innovation and winning this year’s Award – and I wish Wittenberge’s start-ups every success!”

The 2021 winner of the Innovation in Politics Awards for Economy:
Germany: Summer of Pioneers, Wittenberge