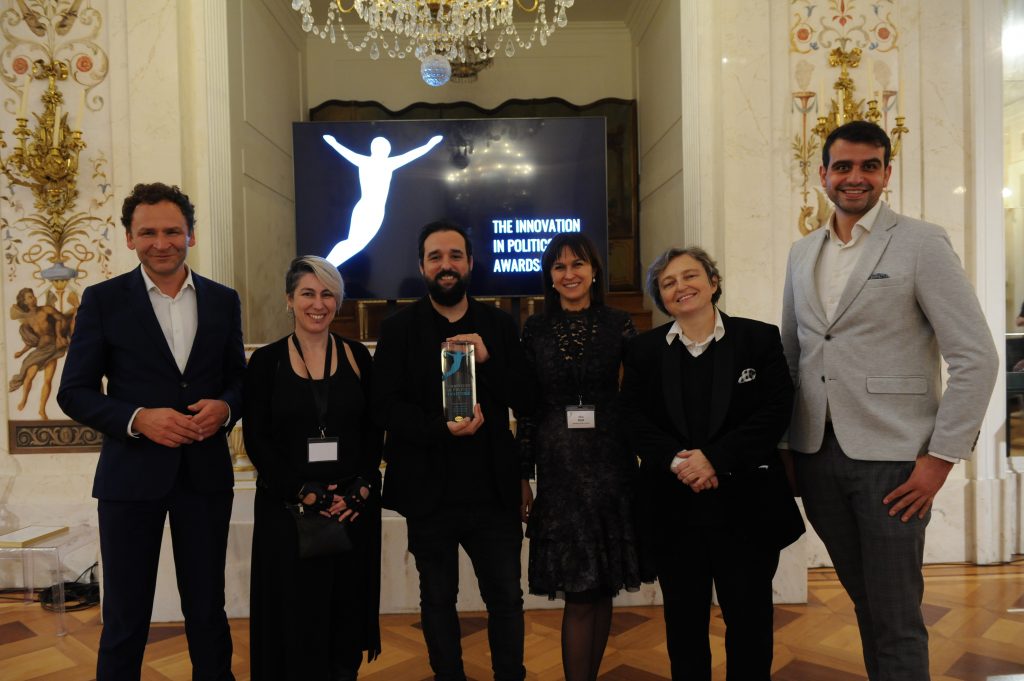 Warsaw, 14 January 2022 – The government of Aragon has won the Innovation in Politics Award in the category “COVID-19 Strategies” for launching a new digital platform within 24 hours in the wake of the pandemic.

Ten projects from Austria, Belgium, Germany, Lithuania, Poland and Spain were finalists in the 2021 COVID-19 Strategies category. The finalists and the winner were selected by a European jury of 1,032 citizens.

The winning project, Frena la Curva (Brake the Curve), was announced in Warsaw by the Guest of Honour Prof. Jerzy Buzek MP, former Prime Minister of Poland and former President of the European Parliament.

The government of Aragon created a citizen’s platform, Frena la Curva (Brake the Curve), to bring together the numerous civic initiatives which were spontaneously being set up to meet local needs. The platform was built in 24 hours and was dynamically designed to meet changing demands and different contexts as new challenges arose.

Volunteers, entrepreneurs, civil servants and social organisations used the channel to organise social energy and civic resilience, involving more than 2,000 activists from more than 300 social organisations. Until today, the technology of Frena la Curva was implemented in 22 countries, and more than 100 multidisciplinary teams were formed, also resulting in two social impact initiatives.

“Innovative approach to public policies is needed in the new era of technical revolution and very complex challenges. We need innovations and innovators to change politics for the better.”

Raúl Oliván Cortés, Director of Open Government and Social Innovation, Government of Aragon, and on the winning team of the Innovation in Politics Award for COVID-19 Strategies:

“In March 2020, we foresaw the huge wave of social energy and solidarity that was about to be unleashed with the rise of the COVID-19 crisis. But we also knew we couldn’t act alone. That’s why we collaborated with people from different professions to build Frena la Curva and share the concept and technology to benefit other countries too. We are delighted that our work has been recognised and we can take the Innovation in Politics Award home to thank all the people involved in Aragon!”

David Leal Garcia, Country Representative in Spain of the Innovation in Politics Institute:

“I am delighted that 25 Spanish projects were put forward for an award this year with Frena la Curva being the first ever Spanish project to win an Innovation in Politics Award!

Frena la Curva is a fantastic example of what political innovation looks like in the 21st century. It shows how, in response to the outbreak of the COVID-19 pandemic, open collaboration between governments, citizens and organisations unleashed tremendous energy, solidarity and creativity to help those most in need during the crisis. I believe this recognition gives visibility to the great work being done in Spain and that it will inspire more political innovation in our country and across Europe.”

CEO of the Innovation in Politics Institute, Edward Strasser:

“For almost two years, every community in Europe had to find their own ways of coping with the pandemic. This has spawned a series of innovations in political work in all areas of politics, helping communities to respond to the illness as well as to other challenges such as transforming social systems and education.

The government of Aragon in Spain, selected as the winner by the Europe-wide citizen’s jury, has shown how to organise the community in an exceptional way so that local initiatives generate the most impact and reach. This is something we can all learn from as we continue to respond to the COVID-19 pandemic.”

The 2021 winner of the Innovation in Politics Awards for COVID-19 Strategies: