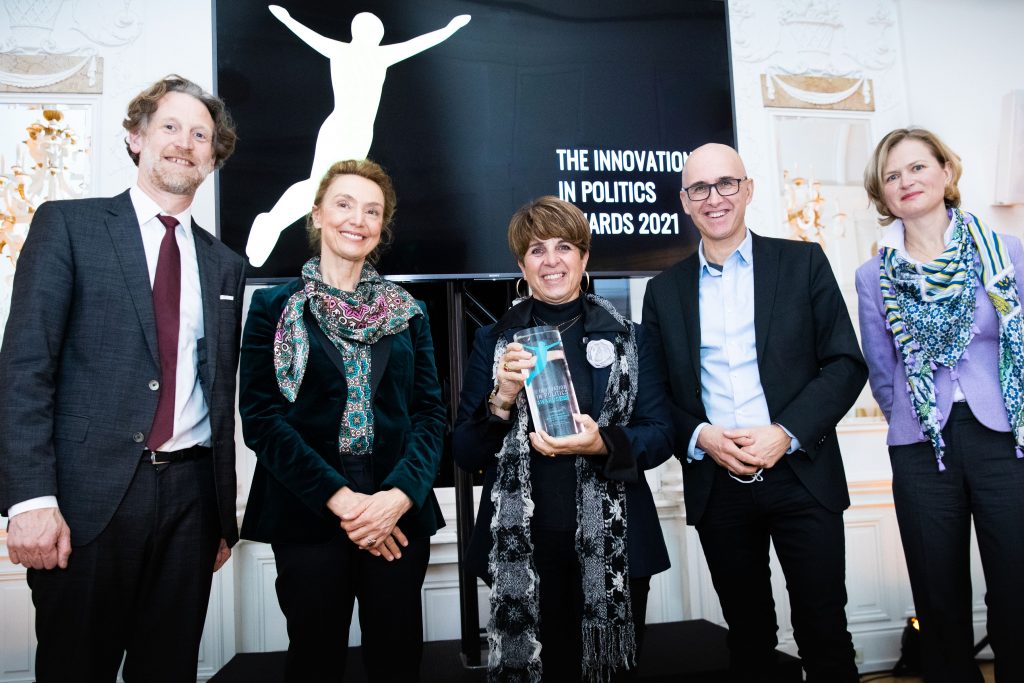 A new sustainable neighbourhood in Utrecht, Netherlands, was awarded with the Innovation in Politics Award for “Ecology” in Paris, while a Greek laundrette for vulnerable groups in society was awarded the prize in the category “Human Rights” in Strasbourg.

Paris & Strasbourg, 18 January 2022 – Twenty projects from Austria, Bosnia and Herzegovina, Bulgaria, Germany, France, Italy, Lithuania, Netherlands, Poland, Sweden, Switzerland and the UK were finalists in the 2021 Ecology and Human Rights categories. The finalists and the winners were selected by a European jury of 1,032 citizens.

The Innovation in Politics Awards are being celebrated as a pan-European series of events, taking place from December 2021 until February 2022 under the auspices of the Secretary General of the Council of Europe, Marija Pejčinović Burić, and the patronage of European Commission Vice-President for Democracy and Demography, Dubravka Šuica.

Neighbours and residents are co-creating a food forest in a new district of Utrecht, Rijnvliet, offering abundant green spaces, water and wildlife habitats as part of the residential environment. They are using participatory design to bring new urban agriculture to the city’s district, enhancing the quality of life and increasing rich biodiversity.

The resulting public spaces will offer recreational benefits and ecosystem services too, including water management, heat protection and cleaning the air, which will make Rijnvliet a very healthy neighbourhood to live in. The new environment will have 15,000 m2 urban food forest with over 200 species of edible flora which doubles up as green infrastructure.

The winning project, Rijnvliet, Edible Neighborhood, was announced in Paris. Guest of Honour Élisabeth Moreno, Minister Delegate for Gender Equality, Diversity and Equal Opportunities, handed the trophy over to the winners.

The Deputy Mayor of Utrecht Klaas Verschuure: “This is a beautiful recognition for all the effort and hard work the citizens from Rijnvliet and the Municipality have put into this. Collaboration and participation are never a quick fix, we have learned a lot from each other. Commitment to and love for our city and neighborhood was always the binding factor. The appreciation and acknowledgement from other European citizens is the cherry on the cake!”

Free access to hygiene facilities for the vulnerable in Greece

Social Laundrette was founded in March 2021 to serve vulnerable citizens in the municipality of Chania, Greece. This new facility provides access to a variety of free hygiene services to improve the quality of life and self-confidence of socially vulnerable citizens.

The facilities include baths for personal hygiene, washing machines, dryers and a store that supplies clothing, footwear and linen for free. Visitors also have access to computers and a television, and can be put in touch with housing, food provision, psychological support and counselling services as needed.

The winning project, Social Laundrette, from Greece was announced in Strasbourg by the Guest of Honour H.E. Marija Pejčinović Burić, Secretary General of the Council of Europe: “The Council of Europe calls upon governments, politicians and civil society to play an active role in protecting and promoting human rights, democracy and the rule of law on our continent. The Innovation in Politics Awards reflect this aim by recognising the work of politicians who seek innovative solutions for today’s challenges and who thereby make an important contribution to the success and resilience of our democracies.”

Deputy Mayor of Social Policy in Chania, Eleni Zervoudaki, responsible for the winning project: “We are very proud that our Municipal Social Laundrette, a project which we designed and delivered about a year ago for the society of Chania, has won the Innovation in Politics Award. In collaboration with the International Organization for Migration (IOM) and the Reframe programme, we implemented this important social facility for socially vulnerable groups which was previously missing from our municipality.

I thank from the bottom of my heart all those who contributed with their donations and  their work to implement this project. Rewarding our efforts is an additional incentive to continue this work, which is always guided by the citizens and their needs.”

CEO of the Innovation in Politics Institute, Edward Strasser: “All finalist projects can inspire communities and governments on the best ways to use and look after our natural resources while improving our quality of life. Rijnvliet, Edible Neighbourhood, has broken new ground in urban planning working from the grassroot level up. While the team behind Social Laundrette are giving their most vulnerable citizens access to facilities essential for them to live and work. On behalf of the Europe-wide jury, I congratulate both winners for making bold ideas a reality in order to improve the lives of their communities.”

The 2021 winner of the Innovation in Politics Awards for Ecology:

The 2021 winner of the Innovation in Politics Awards for Human Rights: