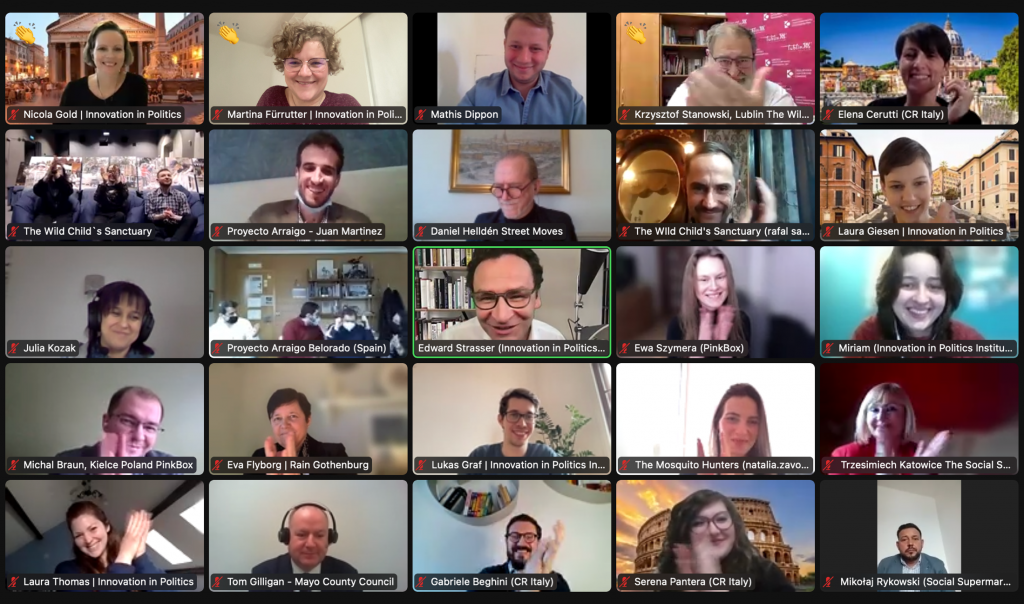 The 2021 Europe-wide Innovation in Politics Awards have drawn to a close with a Spanish initiative being presented the final Award, in the category Quality of Life. Project Arraigo supports urban residents, who want to start a new rural life, to relocate through local networks and an integration system.

Rome, 4 February 2022 – Ten projects from Ireland, Germany, Poland, Slovakia, Spain and Sweden made it through as finalists in the 2021 Quality of Life category. The finalists and the winner were selected by a European jury of 1,032 citizens. The winning project, Project Arraigo, was announced in an online event from Rome, in the last of the 2021 Awards series.

In Spain, 80 percent of the population live on 20 percent of the land. People living in cities endure high living costs and long commutes, and for those that might like to move out of cities and closer to nature, realizing that dream  isn’t always easy.

The social enterprise, Project Arraigo, aims to make it simpler for people and families to move from urban to rural areas in Spain for a better quality of life. It is a collaborative project working with the main stakeholders in rural areas – mayors, property owners, local companies and residents.

Since 2016, a support network for newcomers to rural areas has been developed to welcome and integrate them. The thus increasing population also brings economic benefits, such as adding value to local assets and to properties that have long been neglected. Project Arraigo has by now worked with more than thirty villages to enable the move from urban to rural areas.

Antonio Rosati, former CEO of EUR S.p.A. said: “Congratulations to the winner and all the finalists in this category, Quality of Life, for their achievement and innovative projects, and to all the other political projects participating in this extraordinary event which gathers and shares the finest minds and best innovation practices for welfare and solidarity in Europe.

The main goal of those in positions of responsibility should be to combine our past history with our modern lifestyle in order to improve the quality of life of our fellow citizens, to combine efficiency and solidarity into a new concept we call solidarity-based efficiency, like I have tried to do during in my life and in particular during my experience as CEO at EUR S.p.A.. This will assure a new way to live in our cities through our culture and our history. We should be committed not to leave anyone behind as hardship and poverty are too high a social cost for the realization of a New Humanism as an ideal form of relationships.”

David Garcia Leal, Country Representative of Spain for the Innovation in Politics Institute: “I am thrilled that Project Arraigo and the city council of Belorado, a small village in the province of Burgos, have won this international Award. This shows that there is no such thing as a small solution and that we can achieve great things for our citizens.

It is great news that this is the second Spanish project to have won a 2021 Innovation in Politics Award. We hope that putting in the spotlight the great work being done in Spain will motivate many more to keep innovating boldly to create a better society. Congratulations and thank you to everyone who contributed to this collective success!”

CEO of the Innovation in Politics Institute, Edward Strasser: “The entrepreneurship shown by Project Arraigo to make moving to rural areas in Spain easier is impressive and can be a blueprint for other regions in Europe. Indeed, all of this year’s Innovation in Politics Awards have seen a tremendous amount of creativity and determination, from all over Europe, to do things differently in order to improve the lives of citizens. As we bring this Awards season to an end, I congratulate the finalists and winners of all of the 2021 Awards!”

The 2021 Innovation in Politics Awards were celebrated as a pan-European series of events, from December 2021 until February 2022 under the auspices of the Secretary General of the Council of Europe, Marija Pejčinović Burić, and the patronage of European Commission Vice-President for Democracy and Demography, Dubravka Šuica.

The 2021 Innovation in Politics winners of the categories are as follows:

The 2021 Quality of Life finalists:

The events were supported by